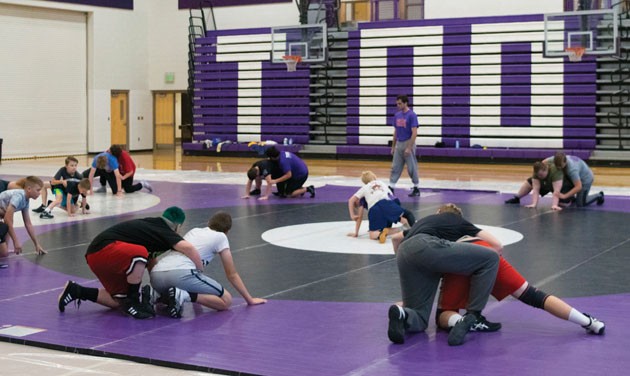 The Tooele High School wrestling program hosted a summer camp this month with 42 youngsters participating from grades fourth through 12th.

Coach Barrett Willson said he would like the camp to continue to grow each year and help reignite the prowess of THS wrestling.

Camp participants learned skills in leg riding, leg attacks, pinning combinations, tilts, and defense to some of those same moves.

“I want to see Tooele High School Wrestling as a real competitor in our region, divisional, and state competitions. I want 15+ kids from our program to go to qualify for state each year and to place in the top four as a team at the state level. In order to do this, we need to attract athletes with the right mindset, or that are willing to develop the right mindset,” the coach said. “Just like every wrestler has a starting point, so do programs. Our program is at a new starting point. I like what I’ve seen from our kids so far, and I’m excited about where things are headed.”

The coach was asked about the advantages of starting wrestling at a young age or whether high-school age students can excel if they start a bit later.

“You can absolutely learn later on in high school. I didn’t start wrestling until I was a sophomore in high school. Obviously, if you start earlier you have the opportunity to learn more over time and gain experience over a greater period of time. However, everyone starts somewhere. Wherever, or whenever, you start you can still accomplish great things as long as you put in the commitment necessary to fulfill your goals,” the coach said.

“There is something about the mindset of a great wrestler that is different. One of my wrestlers, Matthew McCormick, made a comment in camp that fits the mindset I’m talking about.  He said, ‘I hate the pain, but I love the pain, you know?’  Great wrestlers do the difficult things, not because it is easy for them, but because it is difficult. They understand that what they want is on the other side of the progress that will come only by doing the difficult things.”

Most of the kids at camp were from the Tooele area with about four or five kids from the Grantsville area.

“We would like to see this build in the future to be a community-wide event. Obviously, our focus is first and foremost to build our own program, but we also want to build bridges and friendships across the community rather than throwing up walls,” Willson said. “Some of these kids may end up wrestling each other later down the road, and they could end up having a conversation remembering the time they were at camp together as young kids.  It could be kind of a cool thing that ties them together even as they compete against each other.”

Nearly half of Tooele’s team last year was made up of young first-year wrestlers.

“They were mentored by a great group of upperclassmen who were willing to impart wisdom and help the younger wrestlers improve,” the coach said. “Due to that mentorship, the experience gap between the new and experienced wrestlers tightened quite a bit by the end of last season.

“I also want my wrestlers to be part of building a culture where they are also fierce competitors in the classroom. I don’t just want them to work hard in practice and on the mat, but in all aspects of their lives. These young men are eager to learn and progress which will make all the difference in the end. I am proud of each of them and look forward to the legacy that they are helping to build,” Willson said.