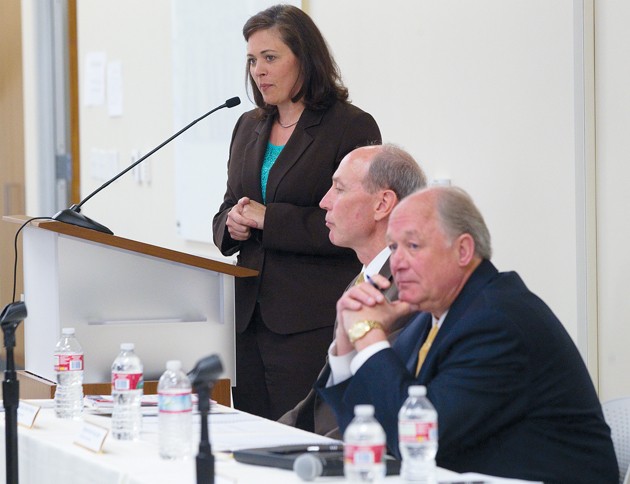 Education governance changes may be in store for 2014 session ♦

The Speaker of the Utah House of Representatives visited Tooele last Thursday and dropped a hint that a change may be in the works for Utah’s public education system.

The meeting’s theme, held at the Tooele Applied Technology College, was “Conversations with the Utah House.”

The first three comments from the audience were from opponents of Common Core education standards.

“Please, can you help us stop or delay the implementation of the common core,” pleaded one parent from the audience. “The state school board is not listening to parents.”

Lockhart took the opportunity to educate the audience about who is in charge of public education, according to Utah’s constitution.

At the time of Utah’s statehood, Congress was concerned about the L.D.S. Church controlling the state’s public education system.

The answer to that concern was to require a separate elected body that would have the constitutional authority for the general control and supervision of the public education system, according to Lockhart.

Lockhart also pointed out that the state school board appoints the state superintendent.

“This decision about the common core was made by them [the state school board] and rightly so,” she said. “I’m not saying it was the right decision. I’m saying it was in their area. It was not made by the legislature. We didn’t even know about it until after they had done it. That’s OK, that’s what they do. They set the standards and they set the curriculum.”

Defunding common core will be hard because there is no line item in the budget for it, said Lockhart.

In regard to the state school board and superintendent, Lockhart implied changes might be in store.

“It is an interesting way that state school members are elected,” she said. “And we will probably look at that process in the legislature this year.”

There are 15 elected members on the state school board. Each one represents a geographical district with the same population.

The members are elected in a non-partisan election, but instead of a primary or convention to vet candidates and whittle down the field of people running, the governor appoints a recruitment and selection committee that reduces the number of people running in each district down to three people. The governor then selects two of the three to run in the general election.

In the past three years, the legislature has entertained bills that would eliminate the governor’s selection committee in favor of a direct non-partisan election as well as holding a partisan election for the state school board.

Other than education, the three representatives fielded questions about the relocation of the state prison, gravel extraction, EnergySolutions, and government regulation of business.

When it comes to moving the state prison, Lockhart said it may look like a good idea, but she wants more data.

“I want good data, I want to make sure that it will save the taxpayers money, and no special deals for anybody,” she said. “If a developer comes in it will be through a competitive bid process, no special treatment, because that’s how I work.”

Discussion of a location for the prison is premature at this time, until a decision is made to move the prison, according to Nelson.

“While Tooele County has been mentioned as a possible site, nobody is out there pushing to bring the prison to Tooele,” he said.

In response to a question about sand and gravel extraction from Tooele County impacting Tooele County roads but leaving the county with no revenue, Sagers said he already has a bill ready for this session to deal with the problem.

“I drafted a bill last session with he help of the county commissioners,” he said. “The bill didn’t have time to reach the floor last year, but it should make it this year. We may have a battle to fight because it means companies will have to pay more for sand and gravel.”

Jeff McNeill asked about the state keeping EnergySolutions from doing their work and taking waste that could generate revenue for Tooele County.

Specifically, McNeill mentioned the depleted uranium that is in temporary storage at Clive.

Lockhart said she has toured EnergySolutions twice and knows what they do out there.

“I deal with a lot of state agencies with  my private businesses and I swear their job is to put me out of business,” he said.

“The legislature has several committees looking at business regulations,” said Lockhart. “It is a big concern that we have.”