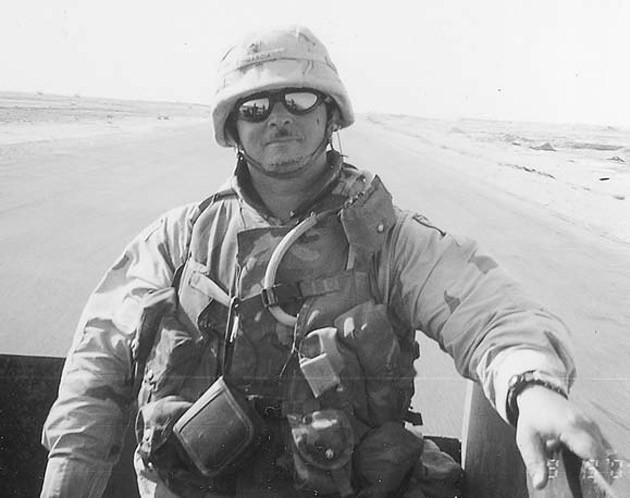 Rudy Garcia returned home Thursday after spending a year with the 116th Combat Engineering Co. CSE in Iraq. Garcia lost his long-haul truck driving business while he was overseas. He’s afraid the loss may send his family into bankruptcy, but he says it’s great to be home.

Coming home was the best thing about his year-long tour of duty in Iraq, said Rudy Garcia, Jr. The worst thing was being away from his family. But Garcia doesn’t regret joining the 116th Combat Engineering Co. CSE because, “It had to be done.”

Garcia was one of at least two Tooele residents who returned Thursday, Feb. 17 from a year-long stint building roads and bridges in war-torn Iraq. A former Marine, Garcia reenlisted with the Spanish Fork National Guard unit on Dec. 15, 2003. Three days later he was called to serve in Iraq. He left for training on Jan. 4. 2004.

“I always planned to reenlist,” Garcia said. He retired from the Marines in 1985 to spend time with his children. Members of the 116th witnessed monumental changes in Iraq during their year of service. When they arrived the country was in chaos, Garcia said. There were more military casualties during the 2004 year of mop-up than occurred during the actual war. But attitudes began to change after the Iraqi elections in January. “People started turning in the insurgence,” he said. “The weeks after the elections, 400 people were arrested for insurgence.”

Garcia compared Iraqis to abused children. “They’ve been beaten down so long they are gun-shy. They have to learn to trust.”

While servicemen did receive some scowls from Iraqis, in general they were given a warm reception. “They were always coming up to you, wanting to hug you and crying and telling you ‘thank you’ for saving us from Saddam,” he said.

The elections gave proof of Iraqi support of the war. “Even though they were threatened and in danger for doing it, they went out to vote,” he said.

“People were taking their little children and lifting (them) up to put the ballots in the boxes.”

The 116th began their tour of duty in Balad, Iraq in camp Anaconda. They then move to Takrit at camp Buckmaster.

While in Buckmaster they helped set off ammunition found stockpiled in bunkers around the city.

“We blew off almost a million tons,” he said. It was estimated it would take almost six years to blow up all the munitions found at that site alone. Solders were also busy uncovering the jets “buried all over the place,” he said.

Camp Buckmaster was built on the dried up remains of a marshland. Saddam had drained the area in an attempt to fight the Shiites who use the land for cover after engaging in warfare against his armies. While servicemen are trying to repair the damage and pumping water back into the marshes, it is estimated it will take 100 years to repair the ecological damage.

The 116th also spent time in Mosul in camp Jaguar, and Tallil LSA Camp Adder. Garcia also volunteered with another serviceman to work in Baghdad.

He spent Christmas 2004 in the city repairing bridges over the Tigress River.

The 116th was under mortar fire almost daily, Garcia said. But the company was “very lucky.” Mortar fire exploded in their path in front of them, or on the trail behind them, but no one was hit. “We got plenty of fire, but I never told these guys, (his family),” he said.

Part of the problem was poor training on the part of the insurgence.

“They can’t shoot worth a damn,” he said. “If they hit, it was a pure accident.”

Insurgents offered Iraqis $1,500 to show up at a certain time at a certain point, drop in a mortar and fire the gun. For a country where the average income is some $70 a month, the money was often too good to resist.

But a myth persisted that they missed the soldiers because “they believed we had electrical force fields around our trucks.”

Insurgents wrapped their munitions in electrical tape in the false hope that it would disrupt the force field.

Garcia returned home briefly in March and April of 2004 when his daughter, Risa, was diagnosed with a blood clot on her spine that left her paralyzed for several days. When he received word of her surgery, doctors believed the paralysis could be permanent.

“I was pretty much going crazy,” he said.

The dad was told of his daughter’s condition on a Tuesday and says from Tuesday to Friday he didn’t sleep at all as he hopped a number of troop transports trying to return to Utah.

Garcia was given a 30-day leave, but when Risa’s condition improved, he decided to return to Iraq on April 7 before his leave was up because, “I thought they needed me over there,” he says. “April was a real bad month in Iraq.”

Although Garcia is happy to be home, he returns to another kind of chaos. He lost his long-haul truck driving business while overseas, and fears the cost of paying for the truck will send the family into bankruptcy.

But he doesn’t regret his decision to reenlist because he knows he helped the people of Iraq gain their freedom.

Meeting the 116th Combat Engineering Co. CSE troops as they came home Friday, Utah Gov. Jon Huntsman, Jr., stated, “It is an honor to welcome these troops home. They have proudly and unselfishly served our nation in Iraq.”