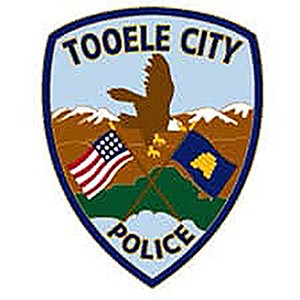 A Tooele man was arrested on June 18 after pointing a fake firearm that appeared to be real at an officer in his patrol vehicle.

While parked there, the officer observed a male on an electric scooter on the sidewalk, according to the probable cause statement written by the officer.

The officer watched the man, who has since been identified as Spenser Thomas, 23, approach his vehicle.

“I was watching Mr. Thomas from my passenger rear view mirror and observed he was slowing down while approaching my front passenger side window,” the officer wrote.

It appeared that Thomas wanted to speak with the officer, so he rolled his window down. When he did that, the officer noticed Thomas had a black and tan handgun in his hand pointed at the officer’s leg.

The officer ordered Thomas to “drop the gun” multiple times before quickly exiting the vehicle and removing his firearm from its holster, according to the statement.

Thomas then dropped the gun inside the front passenger side of the patrol vehicle and stepped away.

Thomas told the officer that he wanted to “turn the gun” into the officer.

The officer instructed him to get on the ground and was able to handcuff him.

After securing the handcuffs, Thomas told the officer that he was trying to get gun regulations changed. He said he pointed the gun at him to show that he shouldn’t be able to have a gun, according to the statement.

Upon further examination of the gun Thomas had, the officer noticed it was a pepper ball style handgun containing a hard, foam projectile ball. The officer also noted that at the time the gun was pointed at him, he thought it was real.

A PepperBall launcher is a  weapon designed for self-defense that fires pepper irritant powder projectiles that break on impact and can disable a threat from up to 150-feet away.

“Because of what Mr. Thomas had done, I nearly shot him due to the realistic appearance of the gun and because he had pointed at my leg when he put his arm inside my car,” the officer wrote in the statement. “He further stated that he had done what he did tonight to prove a point.”

Thomas was charged with assault on a peace officer or military with use of a dangerous weapon, a second-degree felony.