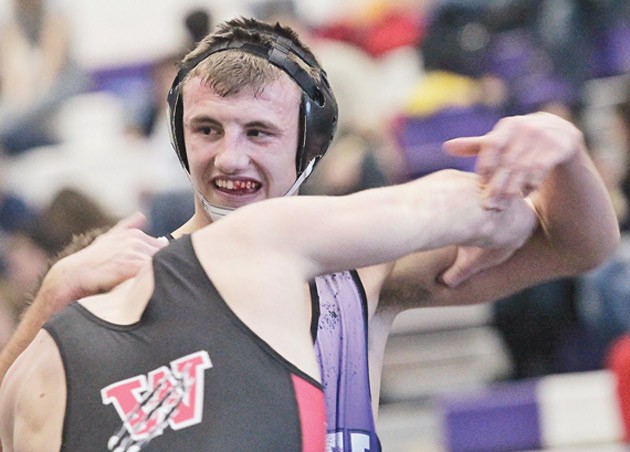 One of the most exciting finishes came in the evening’s final match. Tooele’s Thomas Jensen and Kearns’ Joe Anitoni battled to a 1-1 tie after regulation in the heavyweight division.

Neither wrestler scored in the first period of overtime. After holding Anitoni down in the second period of overtime, Jensen only had to outscore Anitoni in the final 30 seconds to claim the title. Jensen stood up, then dropped down to the mat, putting Anitoni in a gramby hold. This move scored a two-point reversal and three near fall points, putting Jensen ahead 6-1. But with just under 10 seconds remaining, Anitoni was able to reverse Jensen and turned him to his back. But the time expired with Anitoni scoring only a two-point near fall, giving Jensen an exciting 6-5 victory and the heavyweight title.

Two local wrestlers locked horns in the 113 pound class. Tooele’s Jarrid Lavios, undefeated entering the tournament at 15-0, ran into Stansbury’s sensational sophomore Jalen Herrera. Lavios controlled the opening period, grabbing a two-point takedown for a 2-0 lead. But in the second period, Herrera was able to catch Lavios on his back for a two-point near fall.

Entering the third period tied at 2-2, Herrera sensed an upset and reversed Lavios to take a 4-2 lead into the final minute of the match. As Lavios attempted to escape, he was penalized one point for prying Herrera’s thumb. This gave Herrera a 5-2 lead. Lavios was able to escape at the end of the match, but Herrera held on to earn the first-place title. This was Herrera’s second championship this year, as he won the Olympus tournament last month.

Tooele’s Zach Coffman, a defending state champion, had a rematch with Union’s Allen Hamblin at 182 pounds. The two met at the Desert Hills Duals last month. Although Coffman beat Hamblin in the first meeting, the match was a physical, rough match. But in the finals, Coffman dominated Hamblin from the beginning. In the opening period, Coffman took Hamblin down twice, letting him go both times. Coffman grabbed a quick three-point near fall to open the second period. He let Hamblin go twice and earned two more takedowns to lead 11-4 after two periods. He wrapped up the match with a reversal and two more takedowns while Hamblin had three escapes. The match ended with a 17-7 major decision. For his total domination, Coffman was awarded the Outstanding Wrestler for the upper weights.

Coffman will represent THS and the 3A division at the All-Star Classic at UVU in Orem tonight. He will battle Maple Mountain’s Josh Searle. Searle finished second place at state last year in the 4A 160 pound class. Coffman was the state champion in the 3A 170 pound division last year.

Grantsville’s Chance Warr had three victories at 152 pounds to earn a shot at the championship against Uintah’s Dakota Labrum. In a tough battle, Warr came up short, losing 7-2 to Labrum.

In an exciting finish, Tooele’s 126-pounder Tyson Vigil battled Stansbury’s Logan Stewart to a 4-4 tie late in the third period. With just under one minute remaining, Vigil threw Stewart to his back for a two-point takedown and three-point near fall to capture third with a 9-6 victory. Stewart was a third place finisher at state last year.

Stansbury assistant coach Codie Miller was awarded a special plaque by Tooele High prior to the finals. Miller was the head coach at Tooele back in 2004 when he started the first Best of the West tournament. It is now in its 10th year.

Delta won the junior varsity tournament with 223 points, but Tooele challenged the Rabbits, finishing in second place, just 13 points behind with 210. Stansbury finished fourth with 88 points and Grantsville finished in 11th- place with 22 points.