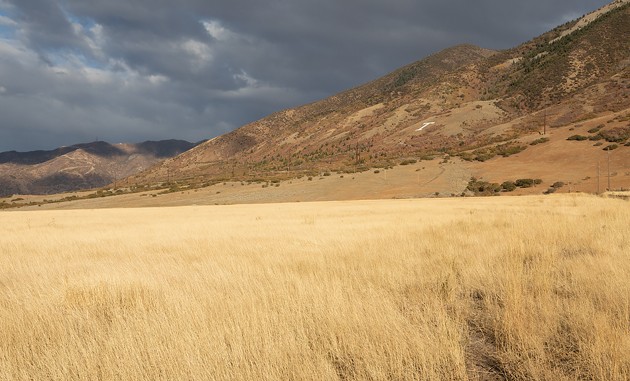 A preliminary plan for a new 66-lot subdivision at the end of Skyline Drive (above) in Tooele was approved by the city council on Oct. 18.

The Tooele City Council approved a preliminary plan for a new residential subdivision near the mouth of Middle Canyon on Oct. 18.

Called Skyline Ridge, the project is a 66-lot single-family residential subdivision on 36.31 acres that is zoned for single-family dwellings on 14,000 square foot lots (R1-14). The property is currently a vacant field located between the end of Skyline Drive and west of Middle Canyon Road.

The preliminary plan request was issued by Todd Castagno of Wise Management.

Jim Bolser, the city’s director of community development and public works department, told the city council the land was annexed by the city a few years ago with intent of developing.

He said the project will be done in three phases, with Skyline Drive extended as each phase moves eastward. He said the slope from the top of the hill down to Middle Canyon Road would be preserved in addition to open space.

Bolser said there are a couple of conditions attached to the project, including open space and the capping and disposal of abandoned, historic well holes on the property.

He said the Tooele City Planning Commission held a public hearing on the project, although it wasn’t required, and forwarded a unanimous positive recommendation to the city council to approve the preliminary plan.

Council Chairman Steve Pruden noted for the audience the city annexed the property 4-5 years ago when it was owned by the late Mathew Arbshay. He said the idea of putting a subdivision on the property is not a new one.

Pruden asked about mitigation of the project’s water retention pond. Bolser said the city will maintain the surface of the detention basin, in addition to the slope down to Middle Canyon Road.