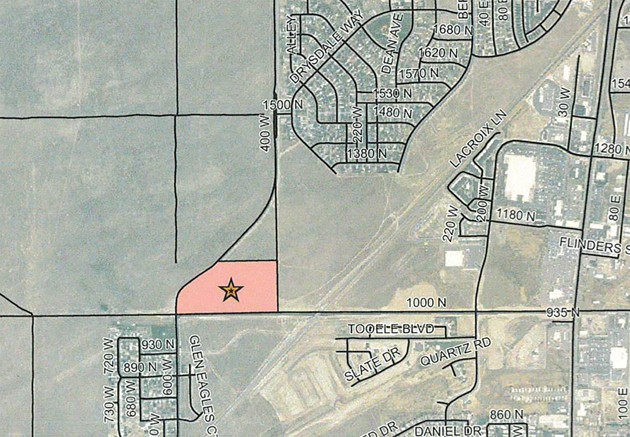 A vicinity map showing the location of 18.18 acres located at 1000 N. 600 West. The parcel was the subject of a zoning map amendment request during Tooele City Planning Commission meeting on Wednesday.

The Tooele City Planning Commission voted 4-3 in favor of a zoning map amendment request at a meeting and public hearing Wednesday at City Hall.

The request was made by Drew Hall, managing partner of Tooele Associates, LP, to reassign the zoning for 18.18 acres located at 1000 N. 600 West from NC Neighborhood Commercial to MR-16 Multi-Family Residential at 16 units per acre.

“The properties surrounding the subject property are largely undeveloped land, however, they are being considered for development, for rezoning and subdivision approval in the vicinity,” he said.

The MR-16 zoning district permits the construction of two-family, three-family and greater dwelling unit buildings. Townhouses, condominiums, apartments, twin homes and other multi-family dwelling style units are permitted. Detached single-family units are not permitted in the MR-16 zone, according to the staff report.

“This property is part of litigation settlement agreement involving Tooele City and parties of the Overlake Settlement Agreement,” Aagard said.

Ten years ago, a jury awarded $20.7 million to Tooele Associates and Perry Homes, stemming from a 1997 development agreement between Tooele City and the developers followed by a long legal fight that started in 2002.

The settlement was awarded to the developers for money lost on their Overlake subdivision, in which the defendant claimed the City attempted to slow the subdivision’s development in hesitation of population growth.

“Any units resulting from this rezone shall be conditioned to count toward the 4,800 unit capped establishments outlined in the settlement agreement,” Aagard said.

The meeting then moved to a public hearing. Drew Hall, the request applicant, came forward to speak to the commission.

“In the settlement of the lawsuit, Tooele Associates won a net $21 million judgment against the City,” Hall said.

“As a result, the city presented that they didn’t want to see all the money leave Tooele and they wished to reduce the cash requirement,” Hall said. “We reached an agreement and agreed to reduce the cash requirement and in exchange received entitlements to develop the Overlake properties and stated the development was up to 4,800 residential units.”

Hall noted that 1,695 acres of the Overlake properties were designated as R1-7 only as a holding zone and that the agreement requires the City to adopt an ordinance giving vested development rights for the 1,695 acres to develop multi-family housing, as outlined in Tooele City Ordinance 2015-04.

“Included in that land are parcels located along Aaron Drive and Berra Boulevard next to the railroad track,” Hall said.

“About a year ago, I received an offer from a company called Metro West [Developers] and they wanted to develop that property,” Hall said. “They submitted an application for high-density residential, which I felt was way too dense and since I was assigning my development rights for that property, I required them to reduce that to a lower-density of multi-family, which they did and the Planning Commission approved it. However, the City Council denied it in a 3-2 vote.”

At a meeting in March 2019, the Tooele City Council denied the requested high-density residential rezone for 21.66 acres in Overlake in opposition to the proposed rezone and planned unit development for the property from Metro West Developers.

Hall said he prepared a new application for lower-density housing on the property.

“I wasn’t the applicant so I didn’t pursue anything in regards to that, rather I prepared a new application for multi-family along those parcels,” Hall said.

“I prepared a traffic report and I was ready to submit this to the city and it occured to me that, looking back 10 years from now, it might be better to have the multi-family on the 18 acres,” Hall added.

Hall said he met with Tooele City Mayor Debbie Winn and he expressed his stance on the Aaron Drive and Berra Boulevard rezone after it failed, stating that the rezone would be more beneficial for the residents of Tooele City and Overlake on the basis of population and traffic density. Hall said he intends not to submit the application for multi-family on Aaron Drive and Berra Boulevard, if in exchange, the planning commission agrees to allow multi-family on the proposed rezoned property at 1000 North and 600 West.

“My position is, however, if you’re not willing to do that, I’m going to submit this application,” Hall said.

“Quite frankly, I don’t care if you vote it down because a settlement agreement and the ordinance clearly give me vested benefits for that … and I intend to implement the dispute resolution in the settlement agreement and hire an attorney and a land-use expert,” Hall said. “It’s very clear that those are vested benefits I paid for, and in my opinion, gave up $16 million for. Let’s work together, be reasonable, give me the multi-family on the 18 acres and I won’t submit any multi-family on the parcels along Aaron Drive and Berra Boulevard and those will remain R1-7. You are not required, by either the settlement agreement or your ordinance to approve this rezone. It’s simply an offer I’m making.”

Commission Chairman Tony Graf responded, asking if the offer is essentially a quid pro quo, to which Hall affirmed and stated that it is not binding to the planning commission.

Tooele City Attorney Roger Baker asked Hall if he would agree that any units developed on this property would contribute to the 4,800-unit cap of homes outlined in the settlement agreement.

“Absolutely,” Hall said. “The total amount of the units that can be developed in Overlake period is 4,800 units and that’s clear in the settlement agreement. We’re not trying to change that. We’re limited to that amount.”

Hall responded that would not occur and that there is already too much commercial in his opinion, to which Sloan stated that he did not disagree with Hall.

The meeting then moved to a vote.

Commissioner Matt Robinson was not present for the meeting. Commissioners Melanie Hammer, Chris Sloan, Shauna Bevan and Ray Smart voted in favor of the rezone. Hammer and Sloan both expressed that the property would be an ideal location for multi-family housing.

Commission Chairman Tony Graf and commissioners Tyson Hamilton and Phil Montano voted no. Graf explained his vote, stating that negotiations and items presented to the planning commission should be done in good faith and not under the auspice of threat of lawsuit.

“I understand that this could be a good location for MR-16. When I look at a plan, it’s designed to be a walkable community for businesses and I believed that it should remain neighborhood commercial,” Graf said.

The approval from the planning commission moves the rezone request forward with positive recommendation to the Tooele City Council.