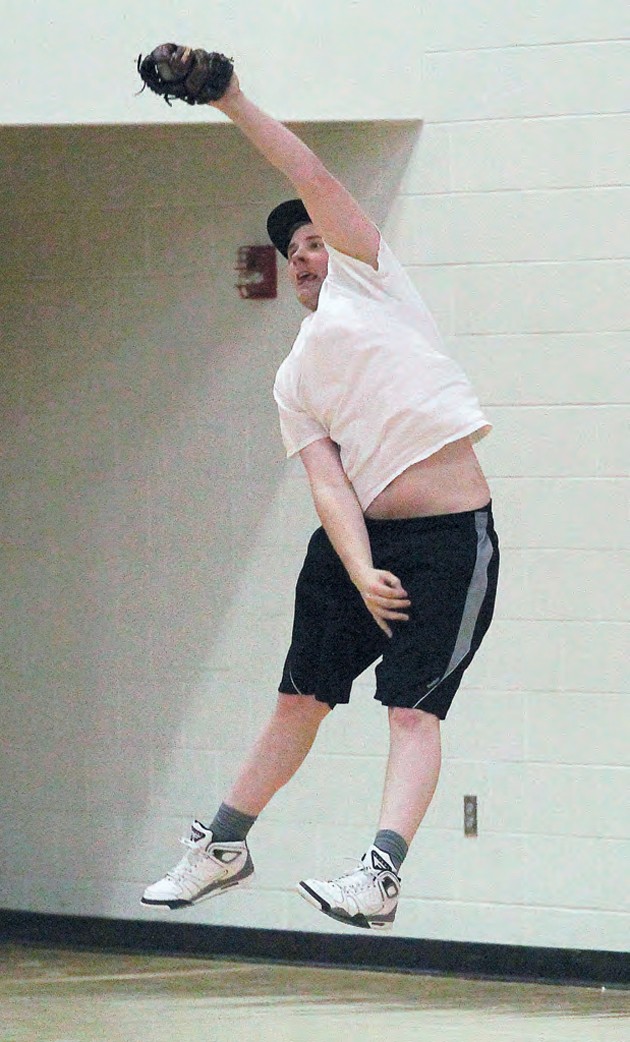 Tooele’s Chris Lane catches a ball during baseball practice on Monday. The Buffaloes open the season today at Provo.

When a baseball team like Tooele loses nine seniors from a year ago and also gets a new coach, some might expect more of a rebuilding year in the future. Even though Catham Beer is in his first year as head coach at Tooele, it doesn’t mean that he is starting over with players he doesn’t know much about.

“We have a lot of seniors this year also that have been waiting their turn to get varsity playing time,” Beer said. “I have been coaching the younger teams so both myself and the players have now moved up to varsity and have been in the program a while.”

Though his players for the 2012 season don’t have an abundance of varsity experience, Beer is confident that they will do great once they get the chance. Beer wants to get Tooele back into the playoffs, a place they haven’t visited since the 2009 season.

Of course there aren’t very many returning players for the Buffaloes but there are two players that saw a load of varsity time last year. Drew Sanders was behind the plate for Tooele last year and Tyler VonHatten saw some work on the mound and in the field.

Due to weather and the recent snow storm, the Tooele players have only been practicing inside the gym and coach Beer knows that the players are eager to get outside and play some games in their quest for the playoffs in 2012.

“We are pretty front-loaded in the pre-season with a lot of games,” Beer said. “Those pre-season games will help us to get ready for the region games.”

Beer believes the fact that he has been a coach in the program helps with the learning curve for the players. Several of the players played fall baseball too for added experience and are used to coach Beer.

Coach Beer knows that his team doesn’t have overwhelming power to be able to use the long-ball this year but where his team lacks in power, he thinks they will be able to make up for in strong defensive play.

“I am counting on the defense to be consistent for us,” Beer said. “I think we only hit two home runs last year as a team so we will have to be aggressive to put ourselves in a position to score.”

Tooele is hoping to have a mixture of being aggressive and playing smart out on the field. Playing aggressive baseball and not making many mistakes can help Tooele overcome its lack of varsity experience.

VonHatten is one of the pitchers for the Buffaloes that had experience pitching last year. Coach Beer likes his fastball and mentioned that he is working on a change-up this year. Sanders will also spend some time on the mound for Tooele and has the ability to mix up his pitches. Senior Jack Memmott can also pitch and has consistent velocity.

One the strengths of Tooele, according to Beer, is the outfield play for the Buffaloes. Memmott, VonHatten, Anthony Montano, Zach Coffman will all be relied upon to run down balls and Beer likes their throwing ability as well. Tyler McMain and Chase Weishaupt will also see time in the outfield for Tooele.

The infield for Tooele is a place where players will have a chance to step up and grab a spot. At shortstop, Tyson Vigil saw a little playing time last year and has a chance to fill that spot. Tre Behunin will also see time as a utility player in the infield.

Chris Lane has a great shot at playing third for Tooele and has been showing a positive attitude this year. Justin Pollmann is a player that can play second base but coach Beer said the most important thing is for players that can play together in the middle infield.

Taylor Butler will be a solid first baseman while Sanders will be behind the plate if he is not pitching.

Coach Beer would like to help guide Tooele back to the playoffs in 2012. “Playoffs are a definite goal this year,” Beer said. “We have talent and there is no reason we can’t make it back there. Sometimes we get a tendency to get down on ourselves and let it dwell but we need to realize that we can only control things that we can control and move on.”

Tooele will see a lot of pre-season work in the Donnie Pymm Pizza Hut Classic in St. George Friday and Saturday with two games each day.