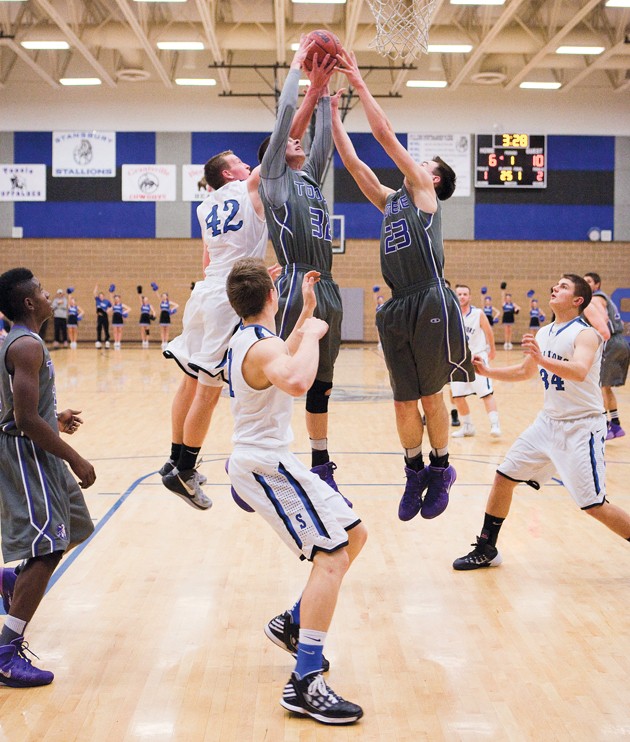 Stansbury’s Jonathan Gibby (42), Tooele’s Justin Pollman (32) and Ace Hymas (23) battle for a rebound in the first quarter of Wednesday’s game between the two rivals.

The Tooele Buffaloes got their vengeance, and now they control third place in Region 11.

On the strength of a 29-13 run in the third quarter, Tooele (3-3 in Region 11) powered through the Stansbury Stallions (1-4 in Region 11) 82-73 to gain sole possession of third place in the region and still possibly — though it would need a lot of help — have a chance to win a share of the region championship.

The Buffaloes wanted to play in a track meet, and that’s what they got in the high-scoring affair.

“We wanted to push the ball because we knew we could run,” said Tooele’s Justin Pollmann, who scored 30 points in the win. “The goal was to beat their bigs down the court and get easy layups.”

Tooele’s Tyler Lawrence scored 22 points to go along with Pollmann’s output. He said the team knew exactly what it wanted to do coming into this rematch with Stansbury.

“Last time we played we didn’t come out ready,” Lawrence said. “We weren’t focused. So we got prepared for this game, came out and ran the floor, and showed them who the band of brothers really are. It was good to come out and play strong. We started out a little lackadaisical in the first half. We came out in the second half ready to play, put it on them, and ran the floor well.”

Leading 40-39 about halfway through the third quarter, Pollmann picked up a Stansbury turnover and brought it back for one of those layups to give Tooele its first breathing room of the night at 42-39. Following a transition 3-pointer where Matt Memmott passed over to Tyler Lawrence, Pollmann swiped the ball away for a steal that he brought back for another fastbreak layup. Pollmann then found Memmott, who wasted no time in hoisting a shot toward the hoop. The ball went through the net for a 3-pointer to make the score 50-39.

Stansbury then battled back thanks to scoring from Gage Manzione. Justin May found him for an assist to make the score 50-43. Manzione then came down on a fastbreak and put in a layup; he was fouled by Tooele’s Lincoln Powers. Manzione sank the free throw to make the score 52-46. Manzione followed that up with another fastbreak layup to cut Tooele’s lead to four points.

The Buffs went back to work. Ryan Brady floated a shot in from the paint, and that set up arguably Pollmann’s most athletic play of the season. Pollmann stripped the ball away from Stansbury’s May and drove down the court with Stansbury defenders closing in. Pollmann got down inside and spun away from the defenders. He went up toward the hoop and finished the play with a finger roll to put the Buffaloes up 56-48. On the next possession, Pollmann dished the ball over to Lawrence, who knocked down a 3-pointer. Pollmann then came down and knocked in his own 3-pointer, ending the third quarter on a 10-0 run.

Pollmann’s shoulder was nagging him throughout the game. He’s played with the injury during the past few games, but it didn’t stop him from hitting the 30-point mark.

“I’m sore. My shoulder hurts so bad,” Pollmann said, “but my teammates gave me so much. My teammates helped me stay in it. They kept me composed. They led me, and I’m just happy that I could have such great teammates that keep me going.”

Lawrence’s 3-pointers on assists from Pollmann and Memmott helped Tooele build its lead in the third quarter, which in turn helped Tooele stave off one last push from the Stallions in the fourth quarter. Pollmann said he always has confidence in Lawrence to hit clutch shots.

Even with the offfensive onslaught by Tooele, Stansbury put up its own offensive power. Four different players scored in double figures for the Stallions. Manzione scored 22, Tom Griffith scored 17, Zayne Anderson 12 and Jonathan Gibby 10.

Stansbury will next play at home against Bear River on Friday. Stansbury sits a half game ahead of Ben Lomond (1-5) in the Region 11 standings for the final playoff spot. Unfortunately, the Scots currently hold the tiebreaker over the Stallions with one game between the two teams still looming Feb. 14. Tooele clinched a playoff spot with Ben Lomond’s loss to Bear River. The Buffaloes play at Bear River on Wednesday.