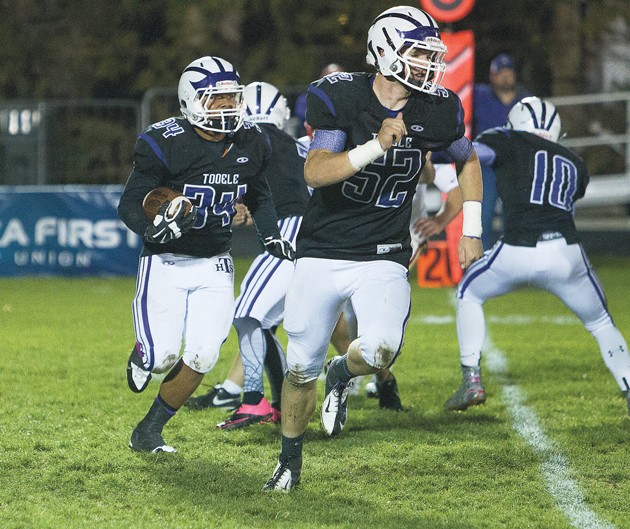 It was all Tooele, all the time Thursday as the Buffaloes stampeded over Judge 51-0 to end the regular season.

And with a little help from Bear River’s upset over No. 1 Stansbury the night before, Tooele earned a share of the region championship.

“It feels good. These kids have done a good job all year and they deserve the title of co-region champs,” Tooele head coach Kyle Brady said. “We’ve played some good teams this year and [have] one blemish on the record, but these guys have played well all season long.”

The opening offensive series effectively forshadowed the rest of the game — on both sides of the ball.

Tooele senior running back Pete Smith ripped a gain of 57 yards on the first play that was furthered to the Judge 10-yard line by a horse-collar penalty. Fellow senior Lincoln Powers ran the ball in on the next play to make it 7-0 only 19 seconds into the game.

The Bulldogs went three-plays-and-out on the next drive. Judge quarterback Parker Edgington and running back Ryan Kenny had a miscommunication on the handoff that led to a fumble costing Judge 4 yards. Tooele senior defensive tackle Zach Dean sacked Edgington on the next play, pinning the Bulldogs on their own 1-yard line.

The Bulldogs punted to their own 36-yard line, and Powers had a 36-yard touchdown run to make it 14-0 less than four minutes into the game.

Judge threatened on the next drive, getting to the Tooele 36-yard line after four-straight runs of positive yardage, but a fumbled exchange and an incomplete pass preceded a sack that put the Bulldogs back to midfield, where they punted.

Smith gained all the yardage of a two-play, 57-yard drive a minute before the quarter ended to make it a three-touchdown game.

“Pete played amazing,” Powers said. “He had, I’m not even sure how many yards, but he scored within two plays of the first drive, and that’s all because of him.”

Powers scored his third touchdown of the game with 10:24 to go in the half, racking up an eventual 57 yards on six carries. He didn’t play during the second half.

Judge’s best shot at getting onto the score board came by way of an 87-yard interception returned for a touchdown with five minutes left in the half, but it was called back to the Tooele 33-yard line on a penalty, and Judge shortly punted.

Junior running back Jeno Bins capped off a 65-yard scoring drive highlighted by a 43-yard gain by senior running back Mike Dunn to make it 35-0 just before halfime. Bins jumped on a loose ball to end the first offensive play of the second half and set up Zack Tso’s 33-yard scoring run a play later.

Smith led all rushers with 136 yards and a score on seven carries while Dunn had 120 yards on four touches.

Junior kicker Eli Shovan kicked a 19-yard field goal near the end of the third quarter to make it 45-0, and junior running back D’Warren Robinson scored from 13 yards out just before the game ended to make it 51-0.

Senior defensive back Josh Leakehe had an interception, caused two fumbles and recovered one, and made two tackles in the game. Dean and Tso led the team in tackles with five apiece — Dean with two of those in the backfield.

“Our focus is 100 percent on whoever we play next,” Brady said, mentioning after Thursday’s win that he planned to watch the Pine View vs. Cedar game the next day. “We’re just going to take it one game at a time from here on out.”

Tooele will have a bye in the first round of the Class 3AA state tournament before facing the winner of the No. 3 Pine View and No. 6 Ben Lomond matchup. The second-round game is set for Nov. 4.

“It’s good to get our starters some rest, stay healthy and get ready for the playoffs, but it’s hard to not play next week either and have us only playing one half with a lot of our starters, most of our starters,” Brady said. “[It] can throw your rhythm and timing off a little bit, but we’re just happy that we’re healthy.”