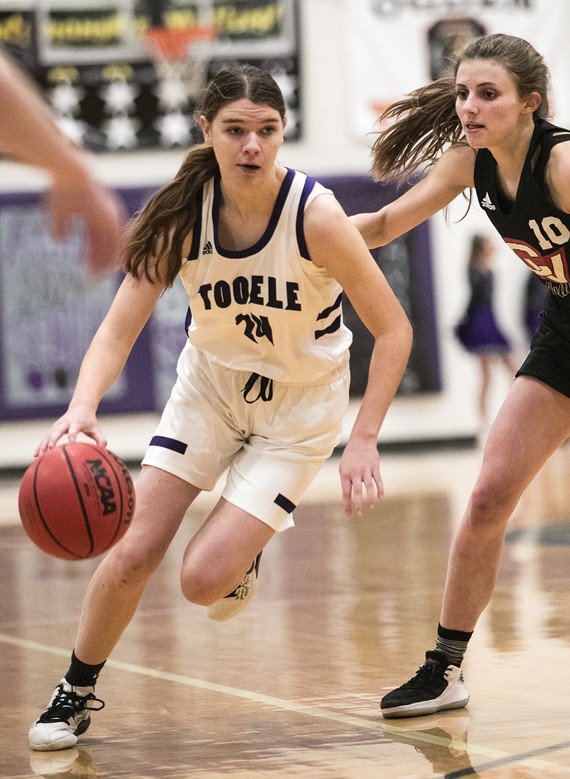 Tooele senior Aysha Lewis was a calming influence for the Buffaloes’ girls basketball team this season — something the Buffs needed, as they got off to a bit of a rough start.

However, Lewis and her teammates hit their stride just when it mattered most, surging to a second-place finish in Region 10. Lewis was Tooele’s leading scorer this season with 212 total points, and she also hit a team-high 27 3-pointers. But she didn’t just lead the way on the stat sheet. Her leadership was key to her team’s success, and helped her become just the fifth player to win the prestigious Jackie White-Kimber Memorial Award two times.

The award is given annually to the member of the THS girls basketball team who best exemplifies leadership skills and character while playing an integral role on the team.

“It feels good to get it twice,” Lewis said. “I’m glad I got it again. I’m honored. It shows that I’ve worked hard and tried to help all the other girls that were on the team. I tried to show as much leadership as I possibly could, and it paid off.”

“As a ballplayer, bringing the ball up and down the floor, we really relied on her,” Tooele coach Randy Goss said. “She’s hard for the other teams to trap. She brings it up with confidence and she pretty much attacks the defense. Having her on the floor gave us a lot of confidence.”

Lewis tied her career high with 19 points, including five 3-pointers, in an overtime loss to Millard on Dec. 4 at a tournament in Delta. She also scored 18 points in a double-overtime loss to Canyon View at the Steve Hodson Cancer Classic on Dec. 30.

While the first month of the season was a struggle for the Buffs on the scoreboard, they were able to turn things around once Region 10 play began. Lewis scored 16 points in the Buffs’ 40-30 win over Uintah on Jan. 26.

Her most memorable moment came three weeks later at home against Cedar Valley, when a technical foul put her on the free-throw line with Tooele trailing by one point and no time remaining on the clock. She stepped up and knocked down both foul shots, allowing the Buffs to escape with a 36-35 win.

“In crunch time, she was one we could really rely on,” Goss said. “That takes a little bit of confidence to be able to walk up there and do that. With her confidence and reliability and the other players looking up to her, that’s huge.”

Lewis finished her career with 579 career points, including 58 3-pointers made. She plans to attend Brigham Young University-Hawaii this fall.

“I want to thank my coaches, because I definitely wouldn’t be here without them and their support,” Lewis said. “My parents are willing to pay for all my sports, and my grandpa has always been on me for my basketball. I’ve learned a lot from him and he pushes me to be my best. I couldn’t be more grateful for my grandpa.”

A special Jackie White-Kimber Award was given to Grantsville’s Maison White, White-Kimber’s niece, in 2019-20.