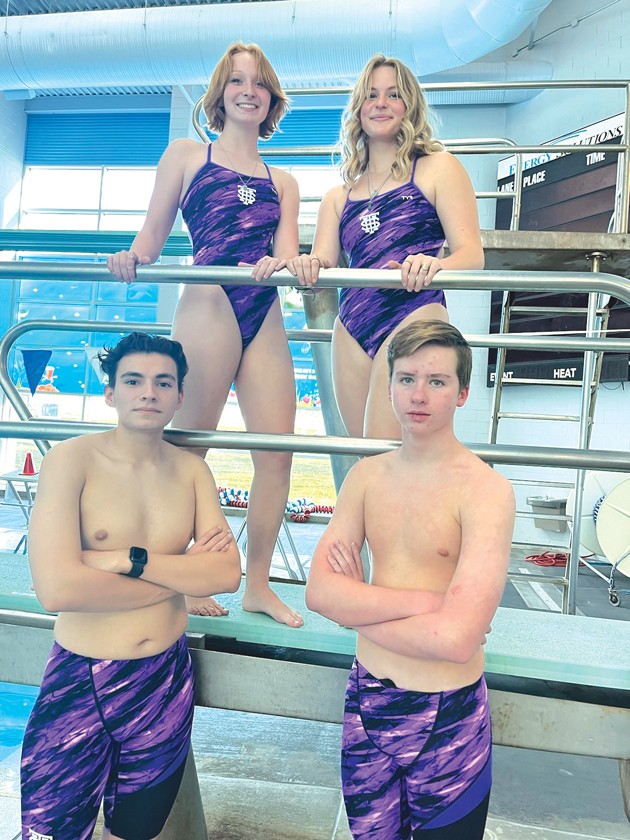 The depth and determination of Tooele High swimmers proved to be enough to nip Stansbury Park in both the boy and girl competitions Thursday at the Leigh Pratt Aquatic Center.

The last event of the day, the 400 free relay, determined the winner of the Region 7 rivals as the Buff boys won 125 to 121.The Tooele girls swept the last relay to edge the Stallions by the final score of 116 to 107.

“I am really proud of all these young men and women,” said coach Holly Tate. “Their hard work paid off by winning close races and being determined to do their best.

“In close meets like this, it takes every team member to do their best in order for us to win,” Coach Tate said. “The swimmer finishing fourth or fifth matters just as much as those who win their event.”

She added, “Both the boy and girl teams beat 5A schools to start the season. We have a lot of work ahead of us, but we are off to a great start.”

The Water Buffs fell behind after a disqualification in the 200 medley relay, the first event of the afternoon. However, Garret Pearson and Ryan Beard surged their team back into contention with a 1-2 finish in the 200 free.

The leading score bounced back and forth between the two schools for the balance of the meet.

The Buff trio of Beard, Kaden Martin, and Morgan McEntire swept the 100 free with 1-2-3 finishes to keep Tooele close at hand.

Aiden Adams, who earned swimmer of the meet honors, won his career first place by hitting his best time of 6:41.61 in the 500 free. Teammate Nathaniel finished third.

In one of the closest races of the afternoon, the 200 free relay of Pearson, Martin, Cramer, and Beard hit the finish pads first.

Seals continued his strong day in the pool with third place in the 100 back. Co-captains Pearson and Christian Zamora earned second and third places in the 100 breast to keep Tooele in the hunt.

Adams, Parker Davis, Jonas Walker, and Delany sealed the win with a first place finish when Stansbury’s team was disqualified for an early take-off.

The overall depth of Tooele’s girl paddlers proved to be the difference as the Buffs knocked off their region rivals.

After being edged by less than a mere half-second in the medley relay, Kate Walker, Haven Saling, Lauren von Niederhausern, and Petra Anderson finished second.

Walker grabbed an early lead and increased it each ensuing lane to win the 200 free by 19 seconds. Sherwood, Lay, and Ovando finished third, fourth, and fifth respectively.

Strong showings by von Niederhausern, Coombs, and Saling in the 50 free added more points to the Buff total.

One-two finishes by Nicholson and Mackenzie Justesen in the 100 free and Coombs and Saling in the 500 free kept the Buffs’ slim lead intact.

Von Niederhausern and Walker teamed for second and third place in the 100 back just prior to Anderson winning the 100 breast. Nicholson added valuable points with a second place.

When swimmers approached the blocks for the 400 free, the dye was cast. First place wins the meet. Coombs, Walker, Saling, and von Niedersern left no doubts who was tops when they cruised to victory, winning the final event 50 seconds.

Captain Lachele Coombs was named swimmer of the meet by her coach.

Tooele heads to Cedar Valley on Dec. 2 to battle the Aviators in another region dual meet.