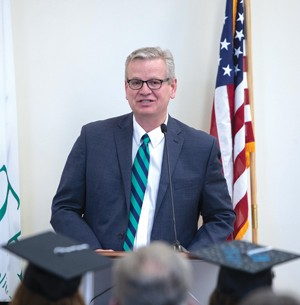 During Utah’s 2021 legislative session, Rep. Doug Sagers, R-Tooele,  helped secure funds for the expansion of Tooele Technical College. The money set aside, in a “Direct Credits” account for technical colleges in the state, amounted to $15.5 million.

Originally, Sagers and the budget committee put the funding into the bill for the 2020 budget, but as the novel coronavirus pandemic threw the economy into a brief upheaval, the legislature decided to postpone the plan until things were financially under control.

In recent years, enrollment at the Tooele Tech ballooned. Since Feb. 2018, Tooele Tech saw a 77% increase in student membership hours and 56% in the school’s overall headcount growth.

As a result of this, many would-be students are finding themselves on the outside looking in.

“There’s a backlog of people that want to get into programs and they don’t have the capacity to do it,” Sagers said. “These funds will help them do that.”

Tooele Tech president Paul Hacking stressed the importance of having physical space for students, especially for those enrolled in programs requiring in-person learning.

One of the major renovations taking place during this expansion will be the rearranging of programs to provide more space and room in which to work. The cosmetology department, which currently holds classes next to the industrial maintenance department will soon get its own wing.

Not only will the newly appropriated funds help increase the school’s threshold for enrollment, it will also allow new programs to be created in the future — something which Sagers believes will be helpful when new business comes to town. Such programs include police training, robotics and pharmacy tech.

The upcoming inland port in Tooele and business park in Erda was also cited as an example of potential facilitators of future students heading into the workforce.

“The inland port will enable the college to be on a better footing to bring new programs in as needed,” Sagers said.

In addition to creating a pipeline of workers going into new jobs in the county, Sagers said there is the potential for programs created to cater specifically to them. For instance, the college has already doubled, this year, the amount of commercial drivers license certificates it offered to students in all of 2020.

“From an economic standpoint, it will be very beneficial to the community,” Sagers said.

Hacking echoed this sentiment, noting that the college already has several working relationships with businesses in the area.

“We have really good contacts with local employers,” he said.

Currently, Tooele Tech has a partnership with 126 different businesses to help run its programs. In anticipation of future growth, the college is working with the industrial depot and is open to working with other industries coming to the county.

Hacking expressed gratitude for Sagers’ efforts and looks forward to getting the project underway.

“I am beyond appreciative of Representative Sagers’ willingness to fight for our community, specifically for our tech college,” he said.