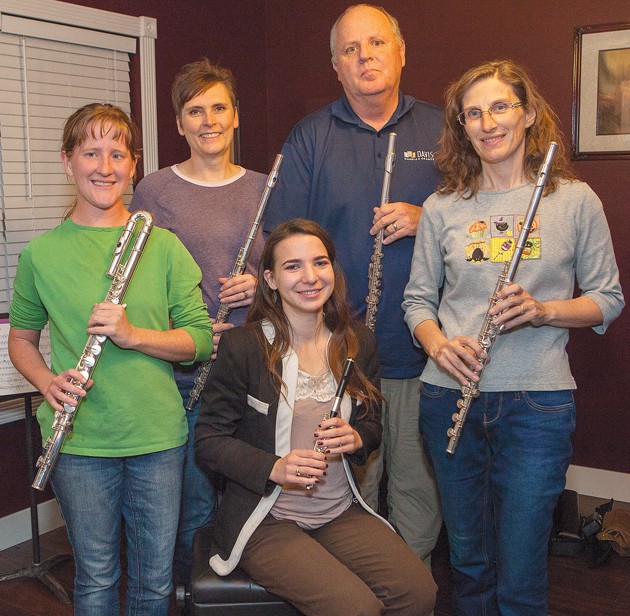 Two years after the Tooele Valley Flute Choir was formed, the group will hold its debut solo concert this Friday in Grantsville.

Local flutist Emma Penrod had an idea to start the choir in winter 2014, when the annual community performance of Handel’s “Messiah” brought a lot of musicians together.

“I was looking around at this nine-member flute section, and then during rehearsal I passed around a note suggesting we start a flute choir and asking for everyone’s contact information,” she said. “Not everyone signed up, but I knew a couple other local flutists who weren’t there and sent out a couple of emails. We started rehearsing regularly just after the final performance of the ‘Messiah.’”

Currently, the Tooele Valley Flute Choir has five members who play the piccolo, C flute and alto flute. They practice about once a week and take turns hosting the rehearsals in their homes.

Although the flutists have played musical selections for various local events like Stansbury Days and family or community parties, they consider Friday’s performance its debut concert because the event will mark the first time they are the sole attraction, Penrod said.

“There’s a big difference between playing a gig at a party and playing a concert,” she said. “If you’re asked to play at a party, what people want is some nice flute music playing a jazz rendition of ‘Jingle Bells’ in the background. While that’s a lot of fun in its own right, it doesn’t afford the opportunity to play more serious music that demands the listener’s attention.”

One of the reasons the group hasn’t held a concert before now is because flute choir music, especially music that doesn’t call for a bass flute, is difficult to find, Penrod said.

“It took us about two years to amass enough music to pull off a standalone concert,” she said.

The concert will feature several classic works, including “Golliwogg’s Cakewalk” by Claude Debussy, “Fugue in G Minor” by J.S. Bach and “Concerto No. 4 in F Minor,” also known as “Winter,” by Antonio Vivaldi.

Some members of the Tooele Valley Flute Choir have played their instrument professionally, while others picked up their first flute a few years ago.

“Our primary goal is to provide more opportunities for local flutists to play and perform a wide variety of music,” Penrod said. “We welcome flutists of all levels to come join us, so if there are other flutists out there looking for a chance to perform or to expand their musical horizons, we’d definitely encourage them to come on Friday and get a feel for what we’re about.”

She added, “And for those who don’t play flute, we’re excited to introduce local residents to a truly modern form of instrumental music.”

The concert will begin at 7 p.m. Friday in the Old Grantsville Church, 297 W. Clark Street in Grantsville. Admission is free.