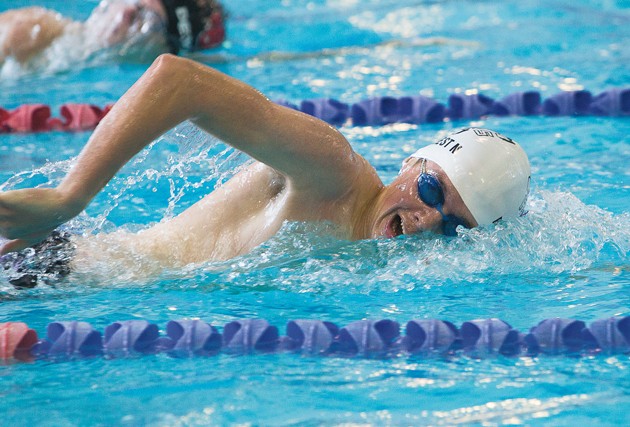 Tooele’s Forrest NIchols swims his way to a first-place finish in the 500-yard freestyle with a time of 5:14.70. Tooele’s Scott Howsden finished in second with 5:17, and Stansbury’s Zaxton Hillman came in third with an official time of 5:18:48.

Stansbury, Grantsville both place in the top eight teams ♦

Coming into the second day of the Tooele Invitational on Saturday, THS head coach Mel Roberts wasn’t in quite the scoring position he wanted to be.

Roberts knew he would get a bunch of points back in the boys 500-yard freestyle race, in which he had the two of the five fastest seed times in senior Forrest Nichols and junior Scott Howsden. But he may not have expected a one-two finish as both Tooele swimmers set personal records.

Nichols won with a time of 5 minutes, 14.70 seconds, more than a second better than his previous best. Howsden set a 5.27-second personal record to come in second with a time of 5:17.00. Stansbury junior Zaxton Hillman came in third in that race, giving Tooele County schools a top-three sweep with his time of 5:18.48.

The high finishes helped the Tooele boys rack up a final total of 332 points to win the meet, and Stansbury finished in sixth with 175.5. Grantsville took 8th with 112.

On the girls side, Tooele won with 302, Stansbury took fourth with 213 and Grantsville sixth with 193.

Stansbury head coach Dan Peterson said he would love to move up to a higher finish in the team standings, but said he isn’t too worried about it and is more focused on helping his athletes improve.

Clonts later won the girls 100-yard freestyle in one of two times under 60 seconds; 58.39 to beat Union’s Celia Peterson.

Roberts said he knew Royle would earn the Tooele girls 200-yard freestyle relay team a big lead, but wasn’t sure how well the rest of the team would hold it. The eventually did, to the coach’s delight, with a time of 1:53.09 from Royle, junior Kelsey Nield, freshman Aspen Grgich and Hardy. They held off Grantsville’s team of senior Jenika Higley, senior Sarah Monson, sophomore Melynda Hughes and anchor Thomas, who gave the Cowboys a second-place finish.

Grantsville head coach Chism Nash said that was the first time he’s had that combination of girls to swim together and was pleased with their time of 1:54.95.

“The kids are doing well and getting good times, and that’s what it’s all about,” he said.

Thomas went on to win the girls 100-yard breast stroke with a time of 1:10.38, a season best but not a personal record. She had a commanding lead thanks in part to excellent turns, and was halfway through the final length by the time the rest of the field reached the penultimate turn.

“They were all right,” a visibly dissappointed Thomas said following the race. “I was hoping to go 1:08 today.”

Stansbury will next compete at Kearns on Jan. 4. Tooele will travel to East the next day. Grantsville won’t compete until a tri-meet with Stansbury and Rowland Hall on Jan. 12.