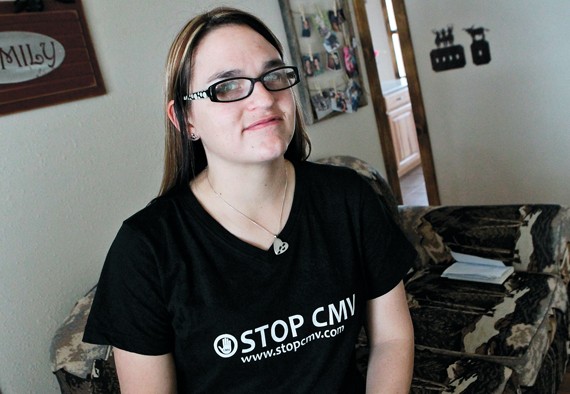 Annie Culley in her Stop CMV shirt Monday at her home in Tooele. Culley is in support of a bill for Utah to establish education regarding CMV.

After visits to numerous doctors who couldn’t tell her what was wrong, Annie Culley found out she has cytomegalovirus — a common virus that’s generally unknown to the public.

But the 30-year-old Tooele woman is hoping to change that. After a nearly year- long trial with CMV, she is helping a bill make its way through the Utah State Legislature.

“Through my experience, I want people to know what CMV is and understand what the outcome can be,” she said.

Although CMV is a common virus that infects people of all ages, it infections are usually silent; most people who have CMV experience no signs or symptoms, according to the Centers for Disease Control and Prevention.

However, CMV can cause disease in people with a weakened immune system, and in babies infected before birth. About 1 in 150 children is born with congenital CMV infection. The infection is transmitted to the baby from its mother during pregnancy.

Culley started to feel sick last February. She had elevated blood pressure, numbness and tingling in her limbs, migraines and vision problems. She first visited her optometrist, who told her everything was fine. He noticed she was on birth control, and sent her to her fertility doctor. That doctor decided to take her off birth control in case it was the cause. It didn’t help.

About a month and a half later, and not feeling better, Culley visited her family doctor who told her to get an MRI, EKG and heart study. All of those tests came back normal.

“I couldn’t make it up my stairs without feeling really tired,” she said. “I couldn’t lift my feet up, let alone take care of my kids or clean my house.”

At that point, Culley went to the emergency room at University of Utah Medical Center. Again, doctors couldn’t find anything wrong with her. She was put on a waiting list to see a neurologist, but continued to feel sick. She next visited a neurologist at St. Mark’s Hospital who ordered $3,500 worth of blood work. Still, nothing seemed out of the ordinary and the doctor couldn’t determine why she felt so sick.

On May 24, Culley found out she was pregnant. She was surprised because her two children, 5-year-old twins, were conceived by in-vitro fertilization.

“I was told that because I was pregnant, that’s what was causing all the sickness,” she said. “I knew that wasn’t it.”

She scheduled her eight-week ultrasound appointment for June 8.

“As I was leaving my appointment, a lady came in with a vial and asked if I was willing to give a sample for an investigational study they were doing for CMV,” Culley said. “I had never heard of CMV. She gave me a pamphlet about it and I agreed to do it. Off I went for the blood draw. Four or five days later, my doctor called and said I was positive for CMV.”

Culley’s extreme symptoms were rare for someone who had contracted CMV, but she was frustrated that no other doctors had discovered what was wrong with her sooner. All that was needed to determine that she had CMV was a blood test. That’s why she decided to become part of a local investigational study.

During the study, patients either received placebo or the CMV virus in hopes that the body would recognize the virus. Culley doesn’t know if her injections were the virus or a placebo, but she progressively started feeling better.

“I was the first patient in the United States to enroll in the CMV study [at the University of Utah Hospital],” she said. “The study is for a treatment to give a mom with the hopes that your immune system will fight the virus before it reaches the baby. It may have been too late for me if I got the real drug. There are 14 hospitals across the country doing the same study.”

Culley had a normal pregnancy until about 20 weeks. At her 20-week appointment, the baby had low fluids, an enlarged liver and enlarged ventricles in the brain.

“My doctor did a test that found CMV was the cause of it,” she said. “The doctor said, ‘your baby is very sick and may not make it to delivery. It looks as though your baby contracted CMV.’ My doctor gave me the option of terminating the pregnancy and I refused. I knew the effects that congenital CMV could have and I was willing to deal with whatever problems my baby could be born with.”

The next ultrasound was done on Sept. 11 at 22 weeks. Culley said everything seemed improved, and she found out she was having a baby girl. She felt relieved and thought she was getting better. But at her 24-week appointment on Sept. 25, Culley learned her baby had no heartbeat. She delivered her baby the next day.

“My worst nightmare became a reality,” she said. “My baby would not come home with me. I can honestly say that it was the worst day of my life. Everything that I had done to protect my baby girl did not work.”

Now, Culley wants to tell everyone she can about CMV. She realizes her story is different because she had CMV before she got pregnant, but she still wants to bring awareness to the community.

Children born with CMV usually have hearing loss or can be severely disabled. Cerebral palsy is commonly caused by CMV. CMV is found in body fluids, and is common in home and daycare settings among young children. To prevent it, Culley said it’s important to not share saliva with young children and make sure to wash hands often. The leading carriers of the virus are children six and younger. CMV is in the herpes family. Once someone contracts it, they have it in their system for the rest of their life. Currently, there is no cure or vaccine for CMV.

“It’s a big virus that has had little attention,” Culley said.

The CMV bill before the Utah Legislature that she supports is sponsored by Rep. Ronda Menlove, R-Garland. If passed, HB 81 will amend the Utah Health Code and direct the Department of Health to establish a public education program regarding the impacts and dangers of CMV, and methods of prevention.

Culley has spoken at two different hearings during the legislative session about her experience. The bill is currently in the Senate. If it passes there, it will next go to the Budget Committee. If it passes that committee, it will go to the governor’s desk for his signature.

A personal experience led Menlove to advocate for the bill. Her granddaughter, who will be 2 in March, was born with CMV. Yet, doctors didn’t discover she has the virus until she failed numerous hearing tests.

“When you think about Annie’s story, my granddaughter and daughter are very lucky,” said Menlove. “That was my introduction to CMV, but the more I learned about it, the more I realized people didn’t know about it. It causes more disabilities than down syndrome and spina bifida. I started working on legislation with the experts studying it at the University of Utah.”

Menlove said if her bill is passed, $30,800 would be used to fund an educational program to make people, especially pregnant women, aware of CMV.

“CMV can be identified and prevented,” said the legislator. “It’s a very common virus. Most people have had it at some point in their life, but it doesn’t impact you unless you’re a pregnant woman. My hope is it will pass and become law, and that we will receive funding needed to educate the public. Not only do we need to educate pregnant women, but we also need to educate health care providers, child care facilities, churches and school nurses.”

Menlove said the money will be used to print pamphlets, create a website and pay salary for a part-time worker who can conduct training on CMV.

“It’ll be a combination of all those things,” she said. “We’re looking at educating a broad group of people, so there will be that human aspect.”

Sen. Daniel Thatcher, R-West Valley City, said he’s grateful he was made aware of CMV, because it was something he’d never heard of.

“We count on the public to bring our attention to these things,” he said. “I’m not a doctor nor have I ever been pregnant. I would never have known that this existed.”

Thatcher said he plans on inviting Culley to the senate floor to stand in the wings while the bill is put into law, which he is sure will happen.

“I expect the bill will pass unanimously,” he said. “This is a particularly important bill that came about because of a real person that had a real problem and came to the legislature for help.”