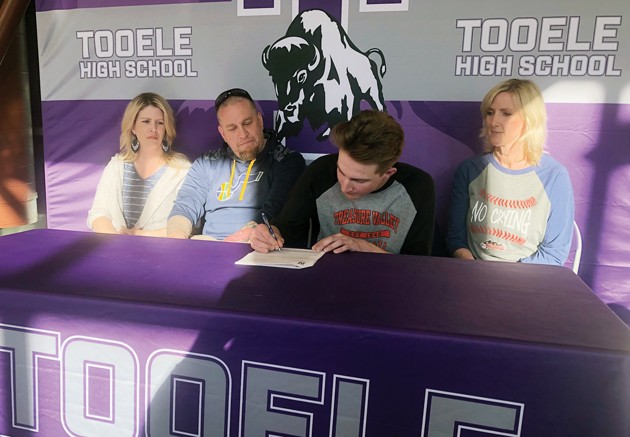 Tooele senior Clay Freeman signs a national Letter-of-Intent to play baseball at Treasure Valley Community College in Ontario, Oregon, during a March 10 ceremony at Tooele High School. Pictured with Freeman, from left, are his stepmother, Becky Freeman; his father, Jared Freeman; and his mother, Kara Mae.

Like many other kids, Tooele senior Clay Freeman grew up dreaming of someday playing college baseball.

Earlier this month, the Buffaloes pitcher took a major step toward making that dream a reality. In front of numerous friends and family, Freeman signed a national Letter-of-Intent to continue his baseball career at Treasure Valley Community College, a two-year school located in Ontario, Oregon.

Freeman decided to sign with the Chukars after talking to friend and former Tooele High teammate Dalton Harris, who is in his first year at TVCC.

“He said he really likes it, and I thought it would be a good opportunity,” Freeman said. “It’s just a two-year school, and I can go up there and get better and maybe go somewhere bigger after that school.”

Freeman was a freshman when Tooele coach Nolan Stouder took over the Buffs’ baseball program prior to the 2017 season. While Freeman might be the same tall, lanky kid he was back then – “he was still about nine feet tall and about 85 pounds – hasn’t grown an inch or a pound,” Stouder joked – his evolution as a pitcher has been something to behold.

“His sophomore year, we needed a starting pitcher for varsity, and we were bouncing around ideas – ‘what do you think about Clay?’ ‘That’s a good idea,’” Stouder said. “There was only one way to find out how he would do. We ended up putting him out there on the varsity mound and the dude absolutely competed, and he hasn’t looked back since. He has progressed and gotten better and he’s put in so much work to get to this point. He deserves everything.”

Since getting his opportunity in the Buffs’ starting rotation, Freeman has flourished. In 17 career varsity appearances, he has an earned-run average of 3.33 in 67⅓ innings pitched with 66 strikeouts and 35 walks. Opponents have hit .272 off him with a .360 on-base percentage. In what could potentially be the final start of his high school career, he threw a five-inning one-hitter with 11 strikeouts and one walk in a victory over Hillcrest at the Crimson Cliffs Classic in St. George earlier this month.

“I’ve learned a lot and I’ve definitely grown a lot in these high school years,” Freeman said. “I’ve gotten my arm stronger to get to the point where I am right now. High school has been a lot of fun.”

Stouder said when he first met Freeman, he immediately recognized his talent and his love of the game, but Freeman’s ability to use those two things to take him to the next level has been particularly impressive.

Stouder also lauded his mental approach, as evidenced by the way he bounced back from a disastrous start against Stansbury last season. Freeman was pulled after allowing four unearned runs and recording just one out, but he only allowed six earned runs and nine total runs over his final five appearances of the season after that.

“His freshman and sophomore year, we knew he was raw,” Stouder said. “He had a good arm and we knew he had potential, but we didn’t really envision how much his potential would grow. “Last year, he just took off with all those innings he threw, he settled in as our No. 2. Teams would face (teammate) Brett (Porthan) and think ‘we got rid of their ace already,’ and then we’d throw Clay at them, who’s pretty much like a whole other ace. Any other team in our region and probably in the state of Utah would have loved to have him in their rotation.”