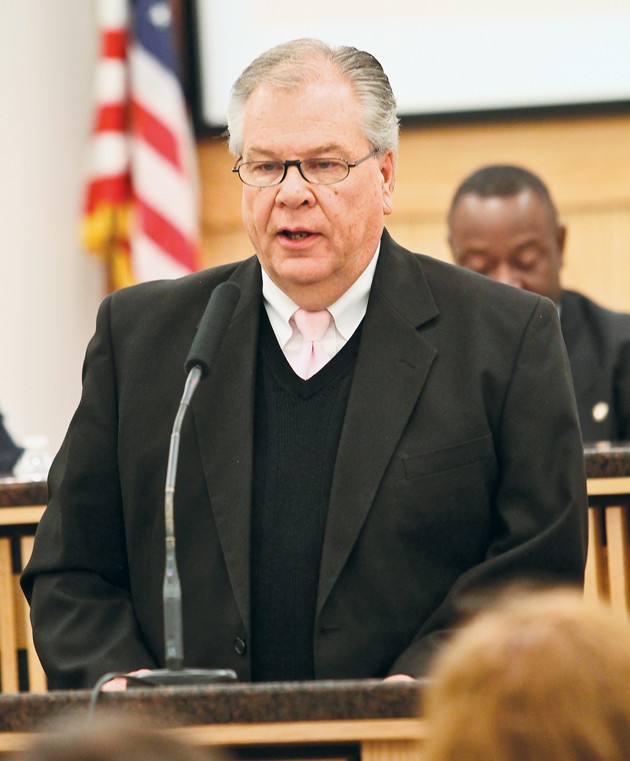 Tooele City Mayor Patrick Dunlavy gives his State of the City address Wednesday evening at a city council meeting. The city’s new water wells were among a number of topics discussed during Dunlavy’s address at the meeting.

Accomplishment, opportunity and fiscal responsibility is what Tooele City will see in 2013, said Mayor Patrick Dunlavy during his annual State of the City address Wednesday.

“I stand proudly before you tonight to report on the state of this wonderful city,” he told the city council, city staff and residents.

The additions to the wastewater treatment plant now allow the city to produce certified water for reuse purposes, and a product from remaining solids that can be used to fertilize city parks and the golf course. Dunlavy said both will save the city thousands of dollars.

The southeast bench waterline project now gives the city the capability to move water from its wells and reservoirs to the bench areas on the east and southeast sections of the city.

The two new wells will be drilled in early spring. After completion, they will produce an estimated 2,000 to 3,000 gallons of water per minute for the city, said the mayor.

Dunlavy said the city’s partnership with TATC will bring training and educational opportunities to residents that were never before available. Dunlavy specifically thanked Scott Snelson, president of TATC, and Randy Sant, the city’s economic development director, for “making history in making this project happen.”

The new TATC is scheduled to open in mid-April, with classes available for students at the beginning of May. Tooele City contributed $4.5 million to the $14.5 million project.

“This [project] was a significant investment by our Tooele City Redevelopment Agency,” said the mayor. “Our vision and hard work made this possible. Our city has become a shining example to others around the state. Our commitment to the educational corridor that we’ve created will continue as we move our beautiful city forward.”

Dunlavy also said the completion of the 12.4-acre Skyline Nature Park in August was a “remarkable and beautiful addition” to Tooele.

“As you can see, these projects have been completed,” he said. “We are a city that plans, identifies financing and completes projects. Each of these projects adds significant additional pieces for the future. We refuse to stand still and be complacent, while at the same time not getting ahead of ourselves or our finances. You as residents deserve and receive honest, experienced leadership.”

Although Dunlavy is proud of the city’s many accomplishments, he also stated that 2013 will be a year of opportunity for the city to accomplish even more.

“Important projects still need to be done,” he said. “New police and fire facilities are at the top of the list. When the finances for these two facilities come together, we will complete them as well.”

“The future holds exciting, wonderful opportunities to make our beautiful city a better, more vibrant, safe place to raise our families and find jobs,” Dunlavy said. “We will continue our successful efforts to create new employment opportunities, and continue to recruit new businesses.”

Dunlavy said the city is continuing its work to secure tenants for a new 33-acre retail center on the southwest corner of Main Street and 1000 North.

“I know there are a lot of questions concerning this project: Who’s coming? When will it be open? What will it look like?” he said. “I promise you, when everything comes together, we’ll answer all those questions.”

Dunlavy said he feels it’s important for city residents to know that the city is financially sound. He said his philosophy will always be to protect how tax dollars are spent by planning projects that can be completed with available funding.

“I am not asking for additional money,” he said. “Each of you should not be required to pay additional taxes. I take very seriously that I was elected to manage the city. I’ll do it with the funding that is available. The recession continues to play a significant role in decisions that concern finances. Recovery is still slowly moving forward, but we are not standing still.”

Dunlavy thanked the city staff, city council and other city employees for their dedication to Tooele and their expertise in their jobs. He also thanked the citizens for allowing him to serve as mayor and his family for supporting him. He said he looks forward to furthering relationships with the Tooele County Commission as well as with Grantsville City Mayor Brent Marshall.

“Working together we can accomplish much,” he said.

Dunlavy noted Tooele City is no longer an afterthought of Wasatch Front cities. He said residents should be proud to live in a city that other cities can follow by example.

“Decisions that we make are decisions that better our city, strengthen us financially and move us forward,” he said. “I believe we’ve accomplished exceptional things for our city. I’m extremely happy as I look to the future.”