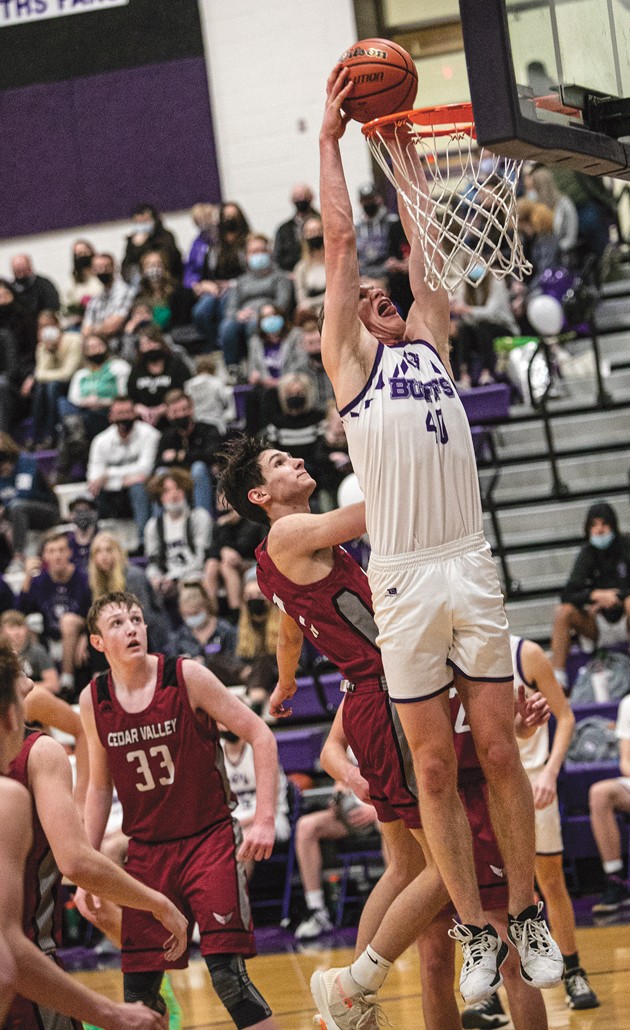 Tooele senior Justin Rogers (40) throws down a dunk during a Feb. 17 Region 10 boys basketball game against Cedar Valley at Tooele High School. Rogers has been named the Transcript Bulletin’s Male Athlete of the Year for the 2020-21 school year.

Sometimes, an athlete’s performance is so dominant in one sport, it is impossible to ignore.

Such is the case with Tooele senior Justin Rogers, the Transcript Bulletin’s 2020-21 Male Athlete of the Year.

While Rogers also had a senior season to remember for the Buffaloes on the track, finishing third at the Class 4A state meet in the 110-meter high hurdles in 15.02 seconds, it was on the basketball court where Rogers truly shined. He was named Region 10’s co-Most Valuable Player despite playing for the region’s fifth-place team — an incredible feat, considering that the MVP award normally goes to the best player on the first-place team.

But Rogers’ numbers were just too good. The First Team All-State selection averaged 20.0 points and 10.1 rebounds per game during his senior season, finishing his career with 1,416 points in 95 varsity contests. He led the Buffaloes in 3-pointers made, assists, steals and blocks as well, while serving as an invaluable leader for the Buffaloes.

“At the end of the day, I think it’s more fun to play basketball when you win,” Rogers told the Transcript Bulletin in March. I think a big part of winning was that our team needed a leader, so I stepped up and tried to do the best I could to win every game. It’s definitely fun to score a lot of points or to get the double-double each night, but I feel it’s more important to let your teammates know that you have their back — no matter what happens, they can trust you and that you’re going to do whatever it takes to win.”

Grantsville’s Kaden Kelley was a First Team All-State selection in Class 3A football, recording 72 solo tackles and 12 tackles-for-loss as the Cowboys reached the state semifinals. Most memorably, he ran back a fumble for a touchdown in a playoff win against Summit Academy. He also hit .323 with seven doubles, two triples and 26 RBIs while serving as a calming presence behind the plate for the Cowboys’ state championship-winning baseball team.

Tooele’s Joseph Wilkins, a college signee, closed out his high-school career with a bang by winning the bronze medal in two events at the Class 4A state track meet. He finished the 400-meter dash in 50.02 seconds and the 200 in 22.80, and added a fifth-place finish in the 100 in 11.40.