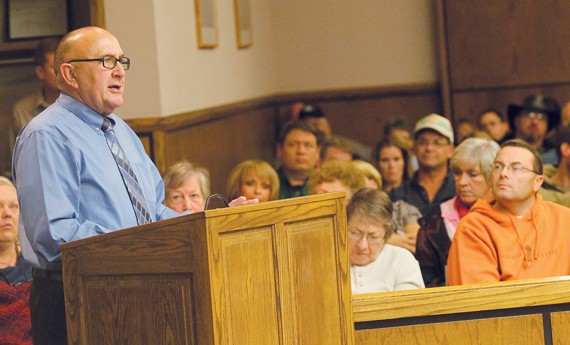 Kendall Thomas speaks during the Tooele County truth in taxation hearing on Dec. 18. In August, the county commissioners announced that revenue would fall short by $4 million, leading to budget cuts, layoffs and proposed higher property taxes to round out 2012.

Mass layoffs, department closures and radical cuts were the order of the day as commissioners faced $4 million budget shortfall ♦

Through the first eight months of the year, county commissioners were sailing along with no clouds on the horizon. Then, in late August, they announced an anticipated $4 million shortfall in revenue by the end of the year and the hurricane broke.

Over the next several weeks, commissioners would lay off 50 people, cut whole departments and even eliminate the county’s beloved bookmobile service as they tried to slash their way out of the red.

Dried-up mitigation fees and unrealized revenue from federal prisoners were to blame for the problem, according to initial comments from commissioners relayed through the county attorney to the Transcript-Bulletin.

“EnergySolutions is the biggest payer of mitigation fees and their activity at Clive is down this year,” said Tooele County attorney Doug Hogan.

Commissioners explained they’d done all they could to avert the crisis.

“We’ve known for some time that the revenue wasn’t coming in like we had thought it would,” said Bruce Clegg, Tooele County commissioner. “We did what we could, like our hiring freeze, and were hoping that something might happen and things would pick up, but it didn’t happen.”

It took three months and three rounds of layoffs before things settled down, with the last round of layoffs taking place in November.

“We really hope and believe this will be the last round of cuts in staff we will have to make for this year,” said Colleen Johnson, Tooele County Commission chairwoman after announcing the November layoffs. “The last few months have been horrible, but we have to reduce expenses to match our income.”

Future commissioner Shawn Milne believes there are more budget reductions that should be made before the commissioners ask taxpayers for more tax dollars.

“I would have done things differently and I don’t think we are done with budget cuts” said Milne. “Some of the cuts could have been made earlier and I would not have exacted the same cuts from every department. There are differences in each department as to how much of their budget is for essential services.”

Milne said a feeling that that county government was headed for financial trouble was one reason he ran for commissioner.

“I just didn’t expect it to be this much or this soon,” said Milne.Besides the 50 laid off, 28 employees had their employment status changed, and five employees were transferred to a different department in 2012.

The Tooele County engineer was laid off, his position eliminated, and the surveyor’s office was gutted, leaving only the part-time elected county surveyor.

The sheriff’s department lost 22 employees, including the two-man hazmat team. Most of those let go had been recently hired and trained to staff the new jail.

The Deseret Peak Complex lost one full-time worker and 12 part-time workers. The attorney’s office lost three secretaries. One full-time worker each from the office of the county treasurer, assessor, recorder, auditor, the IT department and a justice court clerk were also laid off.

By Nov. 13, Johnson announced that the budget reductions, which included not only staff reductions but reductions in supplies, equipment purchase and travel, totaled $3.1 million.

The county budget was back on track with the original budget approved in December 2011 that included using $900,000 of the county’s fund balance to cover 2012 expenses, Johnson said.

After announcing the final round of layoffs in November, commissioners and several department heads left town for the annual Utah Association of Counties convention in St. George. While the costs of the convention were minimal, with some officials paying for their own travel expenses or staying in private condos in St. George to reduce accommodation expenses, the appearance of officials doing a “cut and run” wreaked havoc on already low morale among county employees.

A week later, the county commission presented the public with a proposed budget for 2013 that included an 82 percent increase in property taxes, the equivalent of an additional $88 on the average $150,000 residence in the county.

Despite unanimous public opposition to the tax hike at a pubic hearing, the county commission adopted their proposed budget at their Dec. 20 meeting with the tax increase intact.

“There is just no way to balance the budget and provide the services we are legally bound to provide without a tax increase,” said Johnson. “The county has not increased taxes for the last 25 years.”