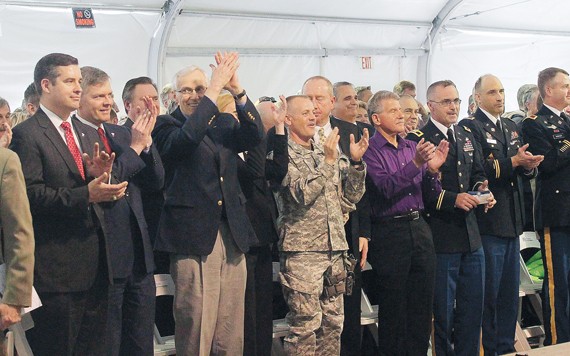 After 66 years, the mission of Deseret Chemical Depot ended, simply, quietly and more quickly than expected, and sent the military installation onto the fast track to shut down.

Since its establishment in 1942, DCD has gone through various states of collection and destruction of chemical weapons. Originally called Deseret Chemical Warfare Depot, it was pulled into the authority of neighboring Tooele Army Depot in 1962 and renamed Tooele Army Depot South Area. In 1979, while still under Tooele Army Depot’s purview, the Chemical Agent Munitions Disposal System, or CAMDS, began operations.

In 1984, the U.S. Army declared plans to incinerate chemical weapons at Tooele Army Depot South Area, among others. Five years later, the State of Utah granted permission for the Army to build the Tooele Chemical Agent Disposal Facility, or TOCDF, and the contract for that project was granted to EG&G Defense Materials, Inc. TOCDF operations began in 1996, the same year the installation’s name was changed back to Deseret Chemical Depot. The treaty was signed the following year, and originally called for the weapons to be destroyed in 2007.

The stockpile included several different substances, including mustard gas, lewisite and World War II-era nerve agent confiscated from the Nazis. More than 24,000 chemical deliveries from storage areas to demolition facilities were required to dispose of the 13,616 tons of chemical agent. Some injuries occurred during the course of the destruction operations, including a worker being exposed to nerve agent in 2002, but no fatalities resulted. As of the last chemical substance disposal last January, the facility had nearly 14 million hours worked without a severe injury.

Alaine Greiser, public information officer for DCD, said that number has only risen as the closure operations have proceeded.

“We’ve still got that record, and, of course, that’s been a real focus, through closure, because when you start going through closure, accidents do happen,” she said. “Everyone’s been putting an emphasis on safety so we can have the record [at the end].”

Similarly, she said, closure operations have been going full speed ahead since the destruction of the last chemical agent last January. Closure consists of the dismantling — and decontaminating, in many cases — of the equipment used for the destruction of the chemical weapons. Some storage facilities will be left behind for future use by the Tooele Army Depot, and some office space is likely to remain, as well.

“Closure operations are going exceedingly well,” Greiser said. “All of that is just going as smooth as can be.”

The more than 1,300-man workforce of DCD and URS, formerly known as EG&G, has been reduced through a series of layoffs, which will continue through 2013. Greiser said many of the employees have taken advantage of education and vocational training programs offered to them, and several others have moved to other chemical weapons facilities.

“All of the programs that URS and the depot have in place to help employees transition is going very well. Some folks have gotten jobs in other states, for those who wish to move on. They have had an education program and so many of their employees have gone on to get their degrees and new job skills,” Greiser said. “I think it’s been a win-win all the way around.”

DCD is scheduled to hand the keys to the installation back over to Tooele Army Depot in July 2013, when it will again become Tooele Army Depot South Area, where portions will be used for storage and other functions.