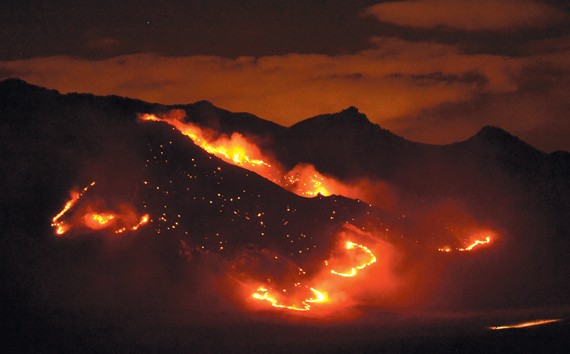 Fire burns along the Oquirrh Mountains near Pine Canyon on July 11. The lack of snowpack in 2011 led to severe drought and fires in the county during 2012. photo courtesy of Michelle Gubler

A dry winter with minimal snowpack was an inauspicious start to a year of severe fires and drought.

In April, the basin-wide average for the three Tooele County snowpack monitoring sites was 49 percent of normal, according to Randy Julander, snow survey supervisor at the Salt Lake office of the Natural Resources Conservation Service.

Despite the low snowpack, in April reservoir levels in the area remained healthy from heavy precipitation in spring 2011, Julander said. Both the Grantsville and Settlement Canyon reservoirs were to capacity, and the irrigation companies were not extremely worried about the amount of water available. However, that notion quickly changed.

In June, moderate to severe drought conditions were declared across most of the country by the National Drought Mitigation Center, with official droughts encompassing 88 percent of the state, including all of Tooele County.

These extreme drought conditions affected ranchers and farmers the most. Without sufficient water, they weren’t able to produce as many crops or feed their livestock with their own crops. By July, many of the county’s ranchers were forced to pull their livestock off the summer ranges early and buy hay they would normally grow themselves. Leland Hogan, a Tooele rancher and president of the Utah Farm Bureau Federation, said the problem was critical.

“We’re in an extreme drought,” Hogan said at the time. “We had to pull our livestock off our summer range early, and our first crop of hay was about 50 percent of what it normally is.”

“It was just phenomenally dry during the critical growing season, which is what really made this particular water year bad,” Julander said. “If you were relying on rainfall to produce wheat, barley or hay, there wasn’t any. It was pretty tough on a lot of ranchers.”

Because of the extreme drought conditions, this year’s fire season kicked off early — before the official wildfire season start on June 1. A 3-acre fire blazed in Delle in February and a 30-acre fire near Vernon reservoir burned in April. Both fires were human-caused. A third fire, called the 73 fire, was sparked in May by a catalytic converter on a car driving on SR-73 near Five Mile Pass. The fire burned 1,390 acres before it was contained a few days later.

“We usually don’t see fires like this until late June into July,” said Roice Arnold, former Tooele County fire warden. “I don’t believe it would have been as bad as it was if we’d had a wetter spring.”

In June, the Gravel Pit fire, which started near a gravel pit southeast of Stockton, was ignited by a group of target shooters and burned a total of 120 acres before being contained. This fire, along with several others across the state, prompted Utah Interagency Fire officials to issue strict restrictions on where people could start fires, smoke or discharge pyrotechnic devices. It also prompted Tooele County to place a ban on exploding targets.

This ban didn’t seem to help much — of the 80 fires that burned in Tooele County during 2012’s fire season, exactly half were human-caused. The other 40 fires were caused by lightning. The 80 fires burned 75,000 acres at a cost of an estimated $3.5 million.

Stockton Fire Department Chief Don West, who has been fighting fires in the county since 1995, said this year was one of the worst fire seasons he’s seen.

“I don’t think it was the worst fire season we’ve ever had, but it’s the worst one we’ve had in a few years,” West said.

The largest fire of the summer, the Dallas Canyon fire, charred 43,660 acres in the Cedar Mountain Wilderness Area in July. In August, the Faust fire burned a total of 22,045 acres about five miles south of Terra in the Onaqui Mountains. In September, Tooele County’s third-largest fire, the Shanty Canyon fire, burned 3,098 acres on Stansbury Island. Some of the other notable fires that occurred during the summer included the 727-acre Flood Fire, which burned in Flood Canyon near Pine Canyon, and the Ibapah fire, which burnt 1,630 acres just east of Ibapah before being contained.

“It was just a terrible year,” Bevan said. “We had hot weather and high winds in March and that’s what really killed us. That contributed to the drought and the fires and it was just tough on everybody.”