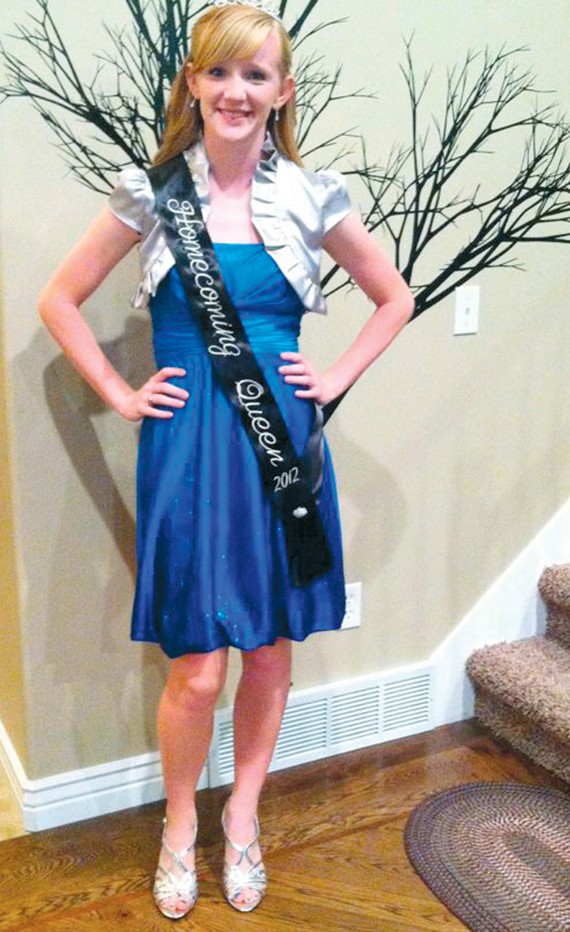 Stansbury High School homecoming queen Erika Alvey poses for a photo before SHS’s homecoming dance. A controversy involving the length of dresses at the dance in September led to a change in the school’s dance dress code. photo courtesy of Angie Alvey

Tooele County schools found themselves in the national spotlight this year for a pair of controversies involving dress code violations.

Tooele Junior High was the first to turn heads. In May, Steve Parker received a phone call from his daughter, Ema, who told him she needed a change of clothes before she would be allowed to return to class. TJHS Principal Larry Abraham had detained her in the school office for donning a skirt that, according to Abraham, violated a dress code that required dress material to come within two inches of the top of the knee. Ema changed and returned to class, and Parker returned home — but not before taking a picture of the offending outfit and posting it on his blog.

That blog, Adult Onset Atheist, gained 30,000 views in one week, and commenters rallied to support Parker, defending his assertion that his daughter’s outfit, which consisted of a white t-shirt and a knee-length brown skirt, was not inappropriate. Other blogs, such as Jezebel and Gossip Girl, picked up the post, and before long outlets such as the San Francisco Chronicle and the Huffington Post were following a viral dress code story out of Tooele County.

The reaction took Parker by surprise.

“It wasn’t like it was a major story about people being abused, tortured or some other horrible treatment,” Parker told the Transcript-Bulletin. “It was about reasonable people being treated unreasonably.”

What the incident did bring to light, according to Superintendent Terry Linares, was the need for the district to review dress codes over the summer, with an eye to written procedures to be followed when enforcing the dress code. Nonetheless, by the end of the 2011-2012 school year, no changes were in place. Come fall, Stansbury High School found itself under fire when dozens of girls were turned away from the school’s homecoming dance because faculty acting as chaperones deemed their dresses too short. Even homecoming queen Erika Alvey was not allowed in.

“I was told if I wanted to come in I would have to go home and put on leggings because my dress was short,” she said.

Dress code standards for formal wear required dresses to be at or near knee length. However, rules posted around the school in the days before the dance depicted a dress below the knees. The vague policy, and inconsistent enforcement, were both cited as reasons why the dance went awry.

“It was ridiculous,” Becca Boren, a SHS junior who was asked to leave the dance, said the following week. “I thought my dress me the standards. It was maybe an inch above the knee. I was surprised when I was told to leave because my dress was too short.”

Frustrated students started a “Stansbury High Homecoming Spirit Massacre” Facebook page that night, showing pictures of girls in the dresses that had caused them to be turned away alongside angry comments from students and parents. By the following Tuesday, the page had 3,430 likes. Again, widespread national media attention ensued, with the story posted or published by more than 150 outlets.

The Monday following the dance, word had already spread across the nation, and the school’s parking lot was filled with media trucks waiting for Stansbury High School principal Kendall Topham. That morning, he held multiple assemblies apologizing to students and promising to hold a second homecoming dance with a revised dress code.

Despite Topham’s apology, assistant principal Keith Davis sent out an e-mail to district employees in which he said the girls who had been turned away had deliberately chosen to ignore the dress code.

“What is sadder is that the school and the administration are being made out to be the villains in the drama caused by poor choices made by a few girls (15-20) out of a potential 750,” the e-mail read. “What were they thinking? That the school would not enforce the school standard that had been approved by the school community council, reviewed by the district and the board of education? What was even sadder than that was the attitude of a few parents to try and defend the choices their daughters made.”

As the debate continued, Topham scheduled a new dance, “Homecoming: Take 2,” for Oct. 12, and planned talks with the SHS community council to review the dress code.

A new policy defining appropriate skirt length as two inches above the knee is now in effect for SHS.