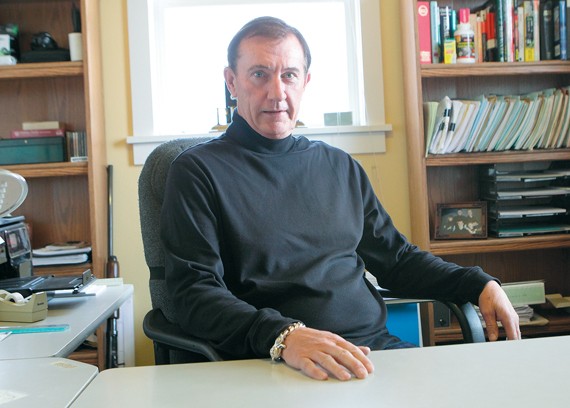 Drew Hall poses for a photo at his office in Overlake on Nov. 16. In November, the Utah Supreme Court refused to hear Tooele City’s appeal of the suit against them by Hall’s Tooele Associates.

This year, Tooele City lost its battle against a jury verdict awarding $20.7 million to the developer of the Overlake subdivision.

In November, the Utah Supreme Court announced, without any further explanation, that they would not review an August 2012 decision by the Court of Appeals to overturn a 3rd District Court judge’s mistrial ruling and reinstated the original jury verdict in the decade-long lawsuit by Tooele Associates against Tooele City.

“We were not surprised by the ruling,” said Tooele City Mayor Patrick Dunlavy. “This is all part of the ongoing process that we have to go through. We will pursue other options that are available to us to protect the interest of our citizens.”

Drew Hall, managing partner of Tooele Associates, the developer of Overlake, said he is frustrated with the city’s resistance to accept the jury’s verdict and the Court of Appeals ruling.

“Tooele City officials can’t face the fact that they lost,” said Hall. “The city’s position appears to be that eight jurors and three Court of Appeals justices all got it wrong.”

In 2009, following a six-day trial in 3rd District Court presided over by Judge Randall Skanchy, an eight-member jury awarded Tooele Associates $22.5 million in damages from Tooele City after they found that Tooele City had slowed or refused final inspections, misapplied the city’s own public improvement ordinances, refused to accept completed improvements, required standards not found in the original 1997 development agreement, refused applications for new subdivisions, refused to renew the development agreement, and refused to approve assignments of the development agreement to Perry Homes, a company that wanted to partner with Tooele Associates and build homes in Overlake.

Before entering final judgment, Skanchy declared a mistrial in the case in June 2010, saying in a 47-page memorandum decision that the verdict reached by the Salt Lake City jury was “irreconcilably inconsistent.” Three weeks after the mistrial declaration, Hall appealed the ruling to the Utah Supreme Court which assigned the Court of Appeals to hear arguments and rule on the appeal.

The Overlake lawsuit started in 2002 when Hall filed several lawsuits against Tooele City. One suit, asking for $200 million in damages, claimed the city basically shut down Tooele Associates’ ability to continue to build the development through anti-growth policies.

In 2004, the city filed a countersuit against Tooele Associates asking for unspecified damages, claiming the company had violated the Overlake development agreement by failing to complete safe and satisfactory public improvements that prevented the establishment of schools; not operating the golf course according to terms of the agreement; not providing a functional secondary water system; not assuring that homes complied with the agreement’s architectural and landscape standards; and several other violations of the development agreement.

The 2009 trial centered on Hall’s claims that Tooele City violated the development agreement and the city’s counterclaims.

The city found ways to stop the development of new plats in Overlake by enforcing codes and ordinances in the subdivision that were not applied to other developers, according to Bruce Baird, the Salt Lake City-based attorney representing Tooele Associates.

Tooele City countered by claiming they had bent over backward to help Tooele Associates succeed, according to George Haley, attorney for Holme Roberts & Owen at the time, who represented Tooele City in the trials.

Tooele Associates, according to Haley, tried to get by with incomplete public improvements, such as streets without curbs and gutters and a smaller golf course than promised in the written agreement.

Haley also asserted that what really stopped development in Overlake was a burst real estate bubble and Tooele Associates’ own financial troubles.

After listening to six days of attorneys and testimony, the jury took two days to deliberate and return their verdict, finding that both Tooele City and Tooele Associates had violated the terms of the development agreement.

Dunlavy said arbitration was tried before the trial but did not work.

With the jury verdict now upheld by the Court of Appeals, Baird has asked Skanchy to uphold the jury’s verdict in his final judgment.

Baird has also requested that Skanchy award Tooele Associates an unspecified amount for court costs, $7.1 million in interest from the date of the verdict through Dec. 1, 2012, and $5,666 in interest for each day after that.

“We are happy to have the Court of Appeals decision agree with all of our arguments about the jury’s verdict,” said Baird. “We hope that now, having lost to the jury and now in the Court of Appeals, that Tooele City will finally treat Tooele Associates fairly as it should have done for the last several years.”

The city may still appeal the final judgment, according to Tooele City attorney Roger Baker. Tooele City has spent $4.2 million defending itself against the lawsuit over the past seven years, according to records obtained from Tooele City under a Government Records and Management Act request.