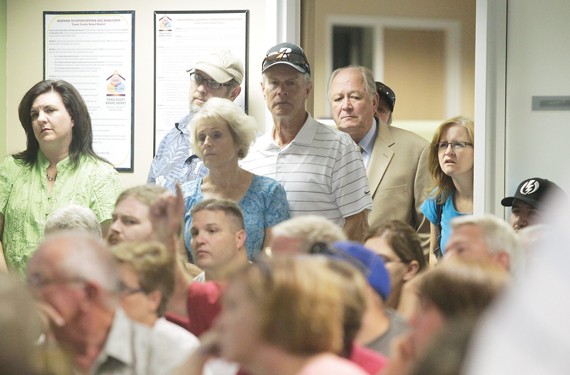 People crowd the entrance of the Tooele County School board conference room at a truth in taxation hearing on Aug. 21. The school board raised property taxes collected for schools in August.

In August, after facing an angry crowd at a public hearing, the Tooele County School Board raised its property tax rate by 9.1 percent.

At the June meeting of the Tooele County School Board, Bruce Williams, business administrator, presented the proposed 2012-13 budget with the tax hike as his last act before leaving the district for a position with the Utah State Office of Education.

“The district has done its best at being frugal, reducing last year’s budget $2 million by reviewing expenditures and cutting costs,” Williams said.

Despite those measures, the tax increase was the only way to make up a $1.8 million shortfall in this year’s budget, according to Williams.

Taxpayers at the truth in taxation hearing held by the school board in August were not satisfied with the district’s rationalization for the tax increase.

Bryan Coulter, of Erda, was ready with suggestions of where to make new cuts.

“Cut all activities and clubs, sell the sports fields, go to Internet schools and shut down buildings and liquidate assets,” said Coulter. “I have had a 30 percent decrease in my pay over the last four years, but I pay $4,000 more in taxes to the government. We are paying through the nose and we are tired of it.”

Others were upset because the way state law sets tax rates their increase would be far greater than 9.1 percent.

Taxpayers whose assessed value of their real property did not drop this year will experience what Lark Reynolds, Tooele County School District business administrator, called the “double whammy.”

The certified rate, which is the tax rate that will produce the same amount of revenue, not including property generated by new growth, can rise significantly when property values drop.

The certified rate is based on the value of property as of the first of the year and is collected in November.

“When we adopted the tentative budget, we did not know what the certified tax rate would be,” said Nelson. “I would not have voted for something that would cause a 20 percent increase in some people’s tax. The 7.1 percent would still be a heavy burden, but it would help mitigate the impact a little.”

In the end, the board approved the 9.1 percent tax increase, claiming that the people at the meeting did not represent the majority of the public.

“I don’t want the silent majority to be overruled,” said Jeff Hogan, school board member. “The majority of my constituents, when I lay out the facts for them, support the tax increase.”

Other board members concurred with Hogan and voted 5-2 to adopt the 9.1 percent increase with Nelson and Jensen the only negative votes.

“We’ve cut millions out of the budget in the last four years while adding enough new students to fill two new elementary schools,” Bryan said “We have cut just about every possible way without affecting student instruction and the quality of education our students receive. The hard reality is if we want to keep class size stable we needed to increase the taxes this year.”