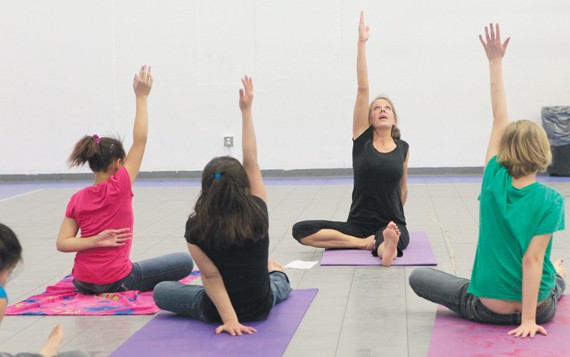 Heidi Rosenberg leads a yoga class for the Boys and Girls Club in Tooele at the Dow James building on March 28. The county is trying to take a proactive stand in the fight against obesity.

Tooele County’s health problems have been well documented in recent years, including its dubious position as the most obese county in Utah, but 2012 was the year health officials started to fight back.

After the plan was released, more than 30 community representatives joined in on monthly discussions at the health department to find ways to help county residents become healthier. Four subcommittees were formed to address the county’s five main problems, but the obesity and physical activity subcommittee was the group to spearhead the plan’s goals.

That group has focused on physical activity, nutrition, worksite awareness, school awareness and health care awareness over the past six months, and has brainstormed a variety of solutions to help Tooele County’s obesity rate to decrease by 2017.

The health department would also like to work with Tooele County to require walking trails, community gardens and bike stations in all new subdivisions. It would also like to see bike lanes added along streets like 200 West and 100 East from 400 South to 1000 North in Tooele.

The group’s next step moving into 2013 is to launch a website for Tooele County residents that can be used to find tips and articles on how to be healthy. The website, which will be called Live Fit Tooele County, will be launched Jan. 9 under the web address livefittc.org.

Teen obesity also became a concern for the health department this year. A study released by the Utah Department of Health in October showed the county is also the worst in the state for teen obesity. The study, conducted in 2011 among eighth, 10th and 12th grade students, showed 10 percent of adolescents in Tooele County were obese.

Amy Bate, public health educator at the health department, said at the elementary level, school officials have been trained on the Active and Healthy Schools Program.

“The program is a new philosophy,” Bate said. “It implements brain breaks or energizers throughout the day to keep the kids active and give them little breaks to get their heart rate going. It’s been shown that it helps their academic performance.”

Bate said the health department has also been working with the various schools in the county to determine how walkable and bike-able each school is. Bate has also worked with Intermountain Healthcare on a vending machine program that will be coming to the three main high schools in Tooele County at the end of February.

“They have a traveling vending machine that we’re bringing into the schools and sitting next to the other machines,” she said. “When students buy something from it, like a candy bar, the machine talks to them and tells them how much fat and calories are in it.”

When it came to tobacco use, a study done by Hilary Makris, Blake Smith and Jay Sadler — all former graduate students in the public health department at Westminster College — provided the first detailed data on tobacco use in Tooele County, including information on who smokes, why they smoke, and what may help them to stop.

According to the study, 20 percent of employees in the workplace in Tooele County use some form of tobacco. That’s a higher rate of usage than for the county’s adult population as a whole — 13.5 percent in 2010 — and a much higher rate than for the state — 8.8 percent — according to the Utah Department of Health. Those findings were presented to the business community at a May luncheon sponsored by the Tooele County Chamber of Commerce.

Debbie Winn, then executive director of the Tooele County Chamber of Commerce, said data from the survey would help the county lower it’s smoking rate.

“It’s going to let us know what we can do to reduce tobacco use in the county,” Winn said. “That’s our goal: to help our employers here to have a healthier workforce.”

Myron Bateman, health department director, said the health improvement plan became a focus this year because health officials wanted to know what the needs of the community were when it came to health instead of guessing.

“We felt like we’d be better providers of services if we knew what the community needed,” he said. “It’s been pretty successful in that we’re bringing community groups together to make a positive difference.”