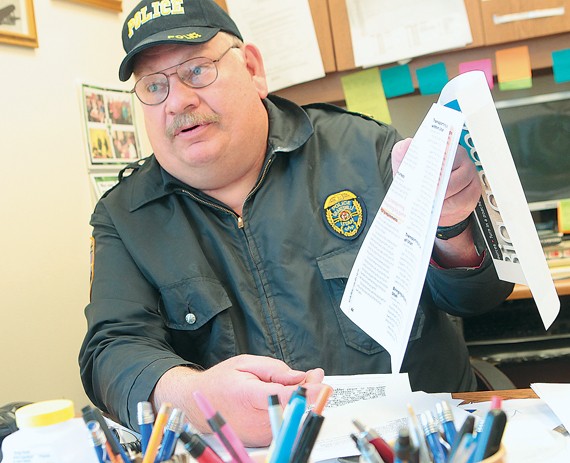 Grantsville Police Chief Dan Johnson talks about his Utah Peace Officer Standards and Training disciplinary council ruling at his office on March 26. Johnson’s police certification was suspended for 18 months and then stripped in April for killing a deer during hunting season on private property, forcing him to retire.

Almost a year and a half after being cited for shooting a deer in a zone for which he did not have a permit, Grantsville City Police Chief Dan Johnson was stripped of his certification and had to retire after 20 years as the city’s top cop.

At a disciplinary hearing for the Police Officer Standards and Training in March, the POST council voted to suspend Johnson’s law enforcement credentials for a period of 18 months, to go into effect on April 22. Because of the length of the suspension, Johnson could not ride it out on a leave of absence, and the department could not simply coast or have him acting as a non-credentialed administrator for its duration as it might have if the suspension had been shorter. The credential suspension also means he cannot seek another position in any other law enforcement agency until it expires.

The ruling spawned from an October 2010 incident in which Johnson and his teenage son were on a hunting trip in Soldier Summit in Wasatch County. Johnson’s son shot a two-point deer, which Johnson then placed his tag on, and the pair found out quickly that the deer had been located on land designated as a Cooperative Wildlife Management Unit (CWMU), a private hunting area for which they did not have the correct permit. Although the land owner did not intend to press charges and told the Johnsons to leave with their kill, investigators from the Utah Department of Wildlife Resources pursued the case and charges were filed against both Johnson and his son in December of that year.

Johnson pleaded guilty in abeyance to one count of wanton destruction of wildlife, a class A misdemeanor, which means that because he followed the terms of court probation and paid restitution for the animal, the charge has since been dismissed.

The circumstances of the case and Johnson’s plea proved to be sources of much discussion among the POST council members, with many suggesting a reduction in sentence because the act was apparently done by mistake, rather than maliciously or knowledgeably, but others countering that Johnson placed a tag on a deer he did not shoot, and that he did plead guilty to a class A misdemeanor.

In the end, Johnson’s sentence, though harsher than many of the other penalties given to other officers also appearing at the disciplinary hearing, was a reduction of the three-year suspension of credentials suggested for the commission of a class A misdemeanor. POST’s disciplinary classification system brackets offenses and suggested penalties according to the level of the crime in a court system, so regardless of the type of offense, a class A misdemeanor would be given a harsher punishment than a class B misdemeanor.

In an interview in March, Johnson expressed particular frustration in regards to the length of his punishment and the shorter ones given to many other officers that day, including one officer who had driven drunk and subsequently been charged with a class B misdemeanor, and particularly in comparison with a three-month suspension given to an officer from the Department of Natural Resources, who shot a deer that was then tagged with his father’s tag. The officer admitted to the offense, which would have amounted to a class B misdemeanor, while interviewing for another job.

“The real stab in the back, the real killer, the thing that I’m really having a hard time choking down, is I felt like I should have got three months, the same as the guy who committed the same kind of offense,” Johnson said in March. “The only difference is he [did not admit to it] and did not turn himself in. I turned myself in. I paid my fine. Tell me why he has the right to be an officer again in three months and I can’t for 18 months.”

In the same interview, Johnson said he was wounded by the overall treatment he received from members of a profession to which he had dedicated 28 years of his life.

“I’ve got a lot of hurts that run deep with this, with the way I was treated by the law enforcement profession, I guess,” Johnson said. “I do want it known that the mayor and city council have been 100 percent behind my back. It’s the POST council I feel betrayed by.”

Johnson, who had been with the department since 1986 and chief since 1992, retired on April 20. After the department was headed by Lt. Steve Barrett while a search for a new chief was conducted, Johnson was replaced in June by Kevin Turner, who had previously been the precinct commander of the police department in Bluffdale, which is a division of the Saratoga Springs Police Department.