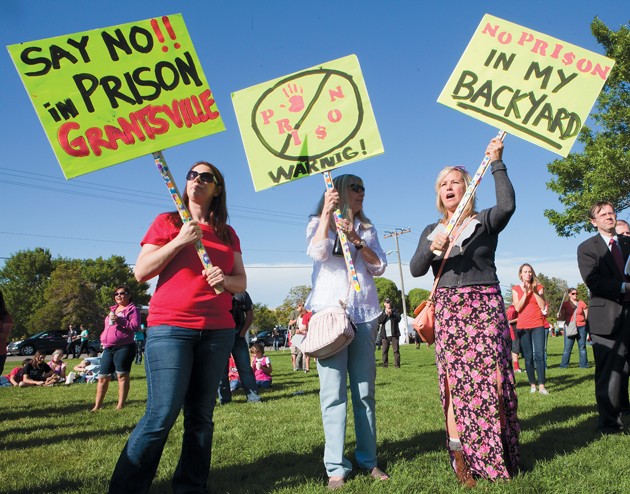 Jamie Kelly, Sandy Fenn and Michelle Calhoun protest the possible relocation of the Utah State Prison to Grantsville at a rally held in the city May 28. The women got their wish when the Legislature passed a resolution Aug. 19 to move the prison west of the Salt Lake International Airport.

After four years of being included in prison relocation discussions, 2015 will be remembered as the year the state decided not to build a prison in Tooele County.

In a special session held on Aug. 19, the Utah State Legislature approved a resolution that designated undeveloped land west of the Salt Lake International Airport as the new home of the Utah State Prison.

The next morning, Gov. Gary Herbert signed the resolution.

Two locations in Tooele County were among the top five spots considered for the prison’s relocation: a 900-acre plot of ground owned by Miller Family Real Estate east of Sheep Lane from the Miller Motorsports Park, and 4,200 acres in an industrial park off of SR-138 on the west side of Grantsville City near the Walmart Distribution Center.

Many local leaders and residents breathed a sigh of relief when the Prison Relocation Commission settled on the airport site.

“I’m grateful we’re off the list,” Grantsville City Mayor Brent Marshall said after the PRC voted to recommend the airport site as the home of the new state prison. “Our prayers have been answered.”

But county leaders did not always adamantly oppose a prison in the county.

When the subject of prison relocation came up during the 2013 legislative session, the Tooele County Commission cautiously courted the state prison.

The commission passed a resolution in February 2013 that said they supported the concept of moving the prison to Tooele County, but desired to be a participant in identifying and selecting a site.

In October 2014, legislators told Tooele County leaders that none of the potential prison sites in Tooele County had made the PRC’s list of top sites.

Accordingly, county leaders were surprised in December 2014 when the PRC put the Miller location on their list of six top sites slated for further review.

“The site was a shock,” said Bruce Clegg, then-Tooele County Commission chairman. “We’ve been on and off the list for years, but I’ve never heard anyone mention this particular location. I don’t think putting the prison in the middle of the valley is a good choice.”

The location could be problematic as Tooele and Grantsville cities grow in the future, according to Clegg.

Bob Nardi, a New Jersey-based consultant for the PRC, reported to the commission that the Miller site was “isolated with little to no development nearby.”

“We are not the state’s dumping ground,” Marshall told a crowd gathered for an anti-prison rally. “We don’t want this prison in our valley. Leave it where it is.”

In December 2014, the PRC trimmed three sites off their top six list and Tooele County went into 2015 with one site still on the PRC’s list of three sites.

Two months into 2015, the PRC added the Grantsville industrial park location to their list of top places to put a new state prison.

Darrell Nielsen, a Bountiful resident and owner of the property, offered it to the PRC for consideration as a prison site. Grantsville City had annexed the property in December 2010 after Nielsen petitioned the city for annexation to create an industrial park, Marshall said.

But talk of a state prison in the industrial park was scaring away potential businesses that were looking at locating in the park, he said.

“We have a couple of businesses that are actively considering coming to that location,” Marshall said. “But they have told us they will not come to Grantsville if the state builds the prison in the park.”

The No Prison in Tooele County group didn’t like the new location, either.

The proposed location in Grantsville was far from Draper and close to Grantsville residents, according to Jewell Allen, co-founder of No Prison in Tooele County group, who could see the new site from her living room window.

“We are extremely disappointed that they added a new site in Grantsville,” she said. “We have the same objections to this site as we do to the Miller site.”

The allocation of limited water resources to a non-taxpaying entity, proximity to residential neighborhoods, and the increased travel distance required for employees, volunteers and families were foremost among her concerns, she said.

The PRC held informational open houses in the communities near the five sites.

Staff members from the PRC, the Utah Department of Corrections, the Commission on Criminal and Juvenile Justice, and the PRC’s consulting team, along with members of the PRC, came to Grantsville High School on May 28 for an open house.

Two days before the open house in Grantsville, Tooele County prison protesters received a partial victory: Miller Family Real Estate announced that the company had withdrawn its property east of Sheep Lane from consideration as a prison site.

“Miller Family Real Estate took a long-term view and realized that it would be better for them to develop the property instead of selling it to the state for a prison,” Sagers said.

On the day of the PRC’s open house in Grantsville, the No Prison in Tooele County group held a protest rally in the city park across the street from the high school.

“Keep the joint at the point,” Marshall told the people gathered for the rally. “You can ask them (the PRC) about keeping the prison at Draper. I have, and I call bull—- on them.”

Marshall brought the rally into the high school auditorium as he opened the question and answer portion of the open house with brusque remarks explaining why he didn’t want a prison in his community.

Contentious at times, Marshall referred to the prison relocation process as a deal made “in a back room with a wink and a nod.”

Marshall invited Gunnison Mayor Bruce Blackham, who was invited by the PRC to be part of the question and answer panel, “to go back to Gunnison at any point tonight where you were elected to run your community, not ours.”

Gunnison has hosted a state penitentiary for 25 years, according to Sen. Jerry Stevenson, PRC co-chairman.

When Stevenson tried to explain why building a new prison in Draper was not possible, cries of “liar,” “that’s not true,” and a few other catcalls were called out by the audience.

The current state prison is in poor physical condition and is not compatible to modern programs for rehabilitation, Stevenson said.

The Draper site is not large enough to build a new prison on while operating the existing onsite prison, he added.

Later that evening, in response to heckling, Marshall took to the stage to ask the audience to be respectful and allow the panel to answer questions.

Following the meeting, Allen said she remained unconvinced that the prison is a good deal for Grantsville or Tooele County.

“They covered over things with a broad stroke,” she said. “They exaggerated some things and minimized the challenges.”

The only opportunity for formal public comment on prison relocation was a public hearing held at the state Capitol on June 16.

Tooele County prison protesters, dressed in bright red T-shirts with a No Prison in Tooele County logo, showed up two hours early at the Capitol to get front-row seats for the hearing.

Among the slew of nearly 60 people who spoke at the public hearing were 14 from Tooele County.

Draper, therefore, is the only community that wanted the prison, and they did not ask for any incentives, according to Marshall’s logic.

“It should stay there (in Draper),” he said. “When will you accept the fact that the prison currently sits at the best site?”

Debra Spilman of Grantsville said she felt like a child being chastised by a parent when she heard the PRC members talk to the public.

“The majority of the citizens of Utah have said, ‘Keep it in Draper,’” Spilman said. “You are supposed to represent us, the people. So what right do you have to go against what your constituents say and demand that the prison be moved out of Draper?”

The PRC met in July and August to review geotechnical reports on the four sites under consideration.

They also looked at a report on the long-term operating costs of a prison located on each prospective site prepared by the office of the Legislative Fiscal Analyst.

The Grantsville site would have required moving 6-7 million cubic yards of earth to create a large enough piece of level ground for the prison, according to the PRC’s geotechnical studies.

The Grantsville site also had the highest estimated cost — $40.9 million — for capital improvements for wastewater treatment, according to the consultants.

That made the Grantsville location the second-highest site in preconstruction costs among the four finalist sites.

When it came to operating costs, the Grantsville site was the farthest from medical centers, courts, employee base, volunteers, visitors and major vendors.

The Grantsville site was also expected to have the second-highest annual driving miles at 740,000 miles, with corresponding air pollution emissions.

The Office of the Legislative Fiscal Analyst put the 50-year cost of transportation, vendors, water, sewer, power, gas, and roads for the Grantsville site at $676 million.

Located on wetlands, the airport site would require the largest investment in tax dollars upfront, according to PRC consultants.

The airport site would require deep structural fill and foundation systems to mitigate flooding potential and squeeze water out of the soil, PRC consultants reported.

However, in the long term the airport site was the least expensive site in terms of ongoing operating costs.

The PRC met on Aug. 11 and voted unanimously to recommend the airport site for the new state prison.

Grantsville was just too far away and too expensive to build and operate, Sagers said.

“The costs in Grantsville were prohibitive,” he said. “The long-term operating costs make it obvious that the Salt Lake City site is the best value for the state.”

The Legislature met a week later and approved the PRC’s choice.

Long-term operating costs overcame expensive site preparation costs to make the Salt Lake site the most attractive location to the PRC, according to Stevenson.