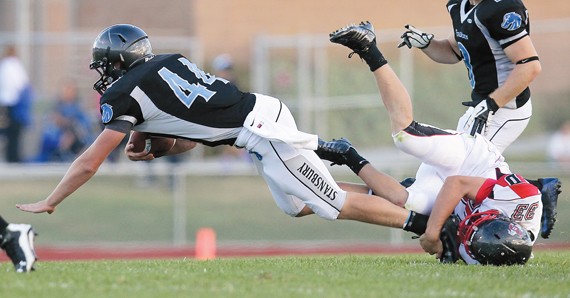 Stansbury High School’s Chase Christiansen dives forward against Delta in a game on Aug. 31. The Stallions finished the season 11-1 with their only loss to 3A state champion Dixie.

The Stansbury Stallions football team once again exited the playoffs on a loss in the quarterfinals, but it managed to win a second consecutive Region 11 championship in the process as well as power through the regular season undefeated — all in just the school’s fourth year of existence.

They had to escape some tight contests along the way to an undefeated regular season, but the Stallions won convincingly in most of their games to put together their best season in the school’s young four-year history.

Stansbury bulldozed through opponents immediately, fresh off the loss to Desert Hills in the quarterfinals of the 2011 playoffs.

The rushing attack that made the Stallions famous the entire year hit the ground running. The Stallions amassed 356 yards and four touchdowns, led by senior running back Jackson Clausing, on the ground in their 51-0 season-opening win against the Uintah Utes at home. Junior quarterback Chase Christiansen attempted just three passes on the game, completing all three, and two of those completions were touchdown passes.

At home or on the road, it didn’t matter. The Stallions went to Park City the next week on Aug. 24, and the rushing attack kept right along. Senior running back Chandler Staley carried the ball just three times, but he put together 104 yards and one touchdown with those carries, giving the Stallions a 42-7 win against the Miners. The Stallions rushed for 359 yards total in that one.

The offense put together just enough points on Aug. 31 at home against Delta, but it was the defense that continued its hot streak. For the third straight week, Stansbury’s defense allowed a touchdown or less en route to a 27-7 win over the Rabbits. Senior linebacker Colton May recorded 13 tackles, bringing his total in the first three games to 42 tackles. He recorded 14 tackles against Uintah and 15 against Park City.

Stansbury opened region play at home on Sept. 7 against Bear River. Chase Christiansen hit Staley for a touchdown pass to open the game, and Bear River scored in the second quarter but missed the extra point. The Stallions broke it open from there with 27 straight points, leading to a 37-18 win.

The early-season simplicity followed the next week with a 55-0 win against Tooele, putting the Stallions at 5-0 and having never lost a Region 11 game. The Stallions went undefeated in the 3A region in 2011, and it put that 8-0 streak on the line against Morgan on Sept. 21.

The Stallions’ Sept. 28 matchup against Desert Hills presented a different scenario. The Thunder came into Stansbury Park on Nov. 4, 2011 and pulled off the upset of the No. 1-seeded Stallions. Neither team garnered anything from this midseason matchup as far as playoff positioning, so it really came down to a game of pride and revenge for the Stallions. Both teams threw up heavy defense against one another, but it was the third-quarter touchdown run by Chase Christiansen that put the Stallions ahead 12-7 and ended up being the difference in the game.

Stansbury easily moved on to 8-0 following a 35-0 beat down of the Ogden Tigers at home, but it needed just one more escape artist act in the Grantsville game to be crowned region champions.

With 3 seconds left on the clock in Grantsville, Cowboys’ kicker Tarl Lewis missed a 25-yard field goal wide right that ended with Stansbury winning 14-13. The miss followed an earlier miss as well as a blocked extra point by the Stallions’ defense in the second quarter.

Stansbury wrapped up the undefeated regular season on Oct. 17 with a 42-0 win at Ben Lomond, and it dismantled Union on Oct. 26 in the first round of the playoffs 60-26.

However, the Stallions’ first loss of the season ended up being its only loss of the season, a 20-13 home loss to the Dixie Flyers. The Stallions did what they could, but the short passing game by Blake Barney and wide receiver end-around plays could not be stopped in the loss.

The season ended at home in the quarterfinals against a St. George team in back-to-back seasons, but the juniors from the 2012 team are already looking forward to the 2013 season. Players such as Chase Christiansen and Jesse Horowitz talked about the disgust they felt after losing to Dixie, and it’s only driving them to come back ready next year.

Going into the school’s fifth year, the football team is being considered as one of the top contenders to win the state championship next year.