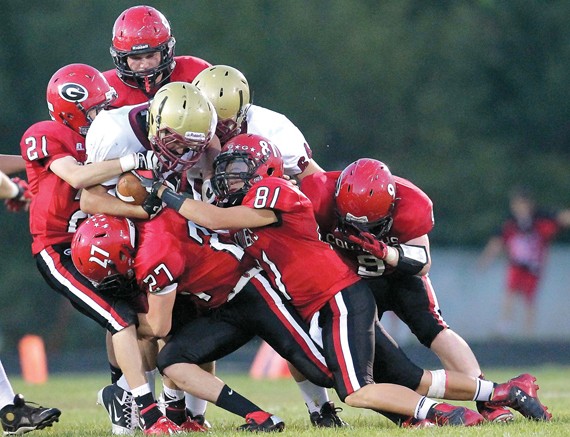 A host of Grantsville players tackle a runner from Juab in a game on Aug. 24. The Cowboys will not compete in the same football classification with Stansbury and Tooele next year.

The Utah High School Activities Association approved a sixth football classification in the recent state realignments that take place every two years, splitting up the 3A class into two separate classes.

Utah’s 3A class had been viewed as the most unbalanced of the five sports classifications because of the varying school sizes, making it difficult for the smaller 3A schools to compete in football with the larger 3A schools.

Therefore, the split of that class into 3A and 3AA has once again split Tooele and Stansbury away from Grantsville.

Region 11 competitor Ogden has moved up to 4A along with Wasatch and Spanish Fork.

Tooele County schools are certainly no strangers to playing in separate regions and in separate classifications, but with the way Grantsville and Stansbury both competed in football for the 2012 season, the football playoffs could get a whole lot more interesting. This is the first time a realistic chance of having two county teams win football state championships exists.

The slate still looks daunting with Judge Memorial and Morgan standing in Grantsville’s way, and Juan Diego and the St. George schools standing in either Stansbury’s or Tooele’s way, but it’s not farfetched. Could Tooele County have two football state championship celebrations in the same weekend during this three-year stretch of realignment?

The six classifications will only exist in football, but there were still other notable realignments to the regions for the other sports. The seven-team Region 11 has now been reduced to five teams starting in the fall of 2013.

With Ogden, Spanish Fork and Wasatch all having moved to 4A, Morgan has been moved to Region 10. So Region 11 will now feature Bear River, Ben Lomond, Grantsville, Stansbury and Tooele.