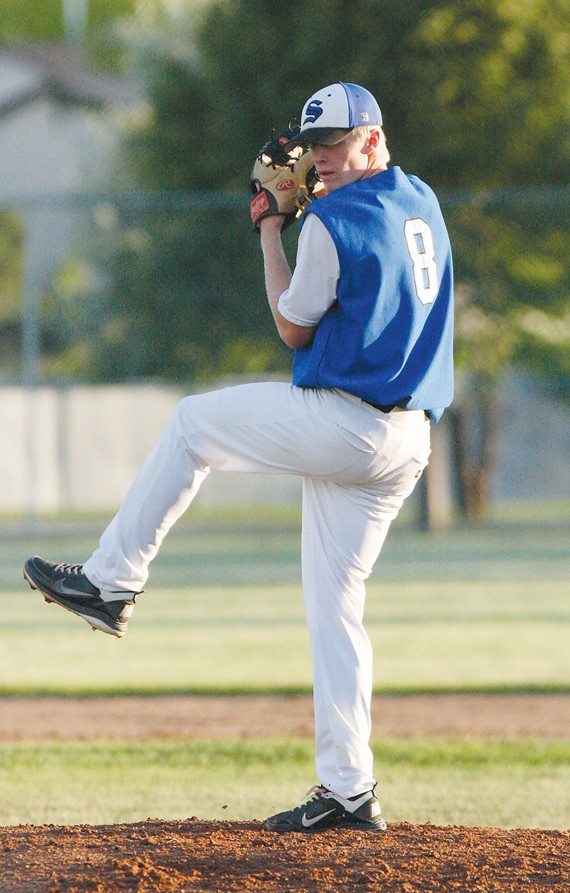 Stansbury Legion player Jesse Clingman winds up against Tooele in the American Legion state tournament in Kearns. Clingman went 6-0 on the mound for Stansbury during the season, and his team won the state championship. photo courtesy of Charlie Haddon

Stansbury and Tooele American Legion baseball teams rolled through their summer seasons with domination in separate leagues and were the only teams left standing on Aug. 3, 2012 — the final day of the Utah State American Legion Tournament at Gates Field in Kearns.

It would be the first time since 1967 that a Tooele County American Legion team would win the Utah State Championship. Tooele grabbed the state title 45 years ago.

Stansbury entered the final day of play without a loss while Tooele had lost once. Tooele would need two victories over Stansbury and they got the first one with 16 consecutive hits in the fifth inning to erase an 8-2 deficit and defeat Stansbury 18-8 to force a winner-take-all game.

The second game started off the same as the first one ended as Tooele grabbed an 11-1 lead after five innings but Stansbury didn’t show any signs of quitting.

Stansbury slowly chipped away at the large Tooele lead, and with the help of a six-run eighth inning got right back into the game. With Stansbury within striking distance, Marcos Chacon tied the game at 13-13 with an RBI single and then Tyson Haddon delivered the eventual game-winning hit with a single to right for a 15-13 lead. Stansbury would hold Tooele at bay in the bottom of the ninth to claim the title

Haddon was named the tournament’s most valuable player for his game-winning hit and his overall tournament play.

“The ultimate goal was to win one of the two games,” said Stansbury Manager Ray Clinton after the final victory. “I saw we were down 11-1 in that second game and told our players that we needed to take away a little at a time and we did that. Having two teams from Tooele County make it a special state championship and it showed that Tooele County can play baseball.”

Stansbury’s lone loss in the state tournament was to Tooele with wins against Westlake, West Jordan, Weber and Tooele twice.

Trevor Clingman and Brek Bentley were the two top pitchers on the team with Clingman compiling a 6-0 record and Bentley at 6-1 record. Chance Shields was 3-0 on the mound.

Wyatt Branch led the team in batting average with a .539 mark while Jarrett Anderson and Chacon each pounded out 16 RBIs. The Clingman brothers specializes in doubles with Jesse tallying nine doubles and Trevor Clingman six.

Other players who contributed significantly throughout the season were Filip Anderson, Jackson Clausing, Trenton Griffith, Haddon and Matt Lindsley.

Clinton was the manager along with coaches Dave Bleazard and Les Horn.