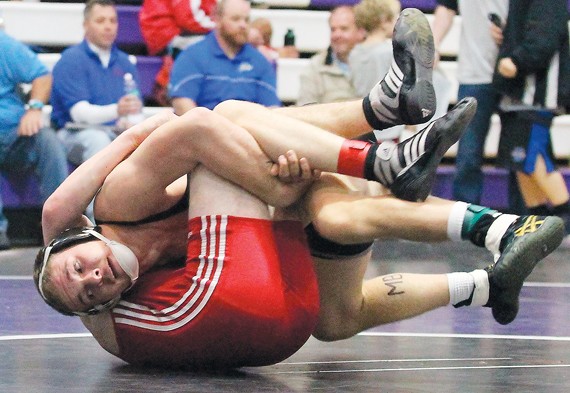 Zach Coffman is the latest in a long line of outstanding Tooele High School wrestlers to take his place among the top grapplers in the state of Utah.

Coffman capped off his junior season in February by winning the 3A state championship in the 170-pound division at Utah Valley University in Orem. Coffman is back for his senior season to challenge for another state title in the 180-pound weight class.

Coffman is off to a good start this season with a 20-1 record to run his overall high school record to 172-15.

Coffman won the Region 11 title and the Northern Division title to gain a top-seed entering the state tourney. He won his first two matches at state with pins and then defeated Taggart Baxter of Wasatch 12-5 in the semifinals.

In the finals, Coffman had a rematch of the divisional finals from the previous week, where he beat Steve Welsh 7-4. Coffman edged Welsh at Delta earlier in th year.

Coffman took Welsh down in the first period, but Welsh earned a one-point escape at the buzzer. Coffman chose neutral to start the second period and the action picked up. Coffman was taken down, but worked for a quick escape. Coffman earned a takedown with Welsh getting an escape late in the second. Trailing Coffman 4-5 going into the third, Welsh chose bottom and worked for an escape to tie the match. The two took turns working for the lead and Coffman earned a takedown and a 7-5 lead with less than one minute in the match.

With about 40 seconds left, Welsh broke away for a one-point escape, but quickly shot and took Coffman down. The three-point swing put Welsh ahead 8-7 with around 30 seconds left in the match. Coffman spun out for an escape to tie the match at 8-8. Coffman worked inside and took Welsh to the mat, with the official awarding the takedown with only one second on the clock. The takedown put Coffman up 10-8 as time expired and gave him the title of state champion.

Coffman finished second at state his sophomore year and finished sixth as a freshman.

Coffman needed strength, energy and determination in the final minute of the match to become a state champion. That sweet victorious moment was preceded by years of hard work and dedication. The THS senior has spent hours and hours honing his skills to become a superb prep wrestler.

“During the high school season I put in 20 to 25 hours per week. In the off-season I wrestle approximately 50 more matches and practice about five to 10 hours per week depending on if I’m preparing for a tournament,” the state champ said.