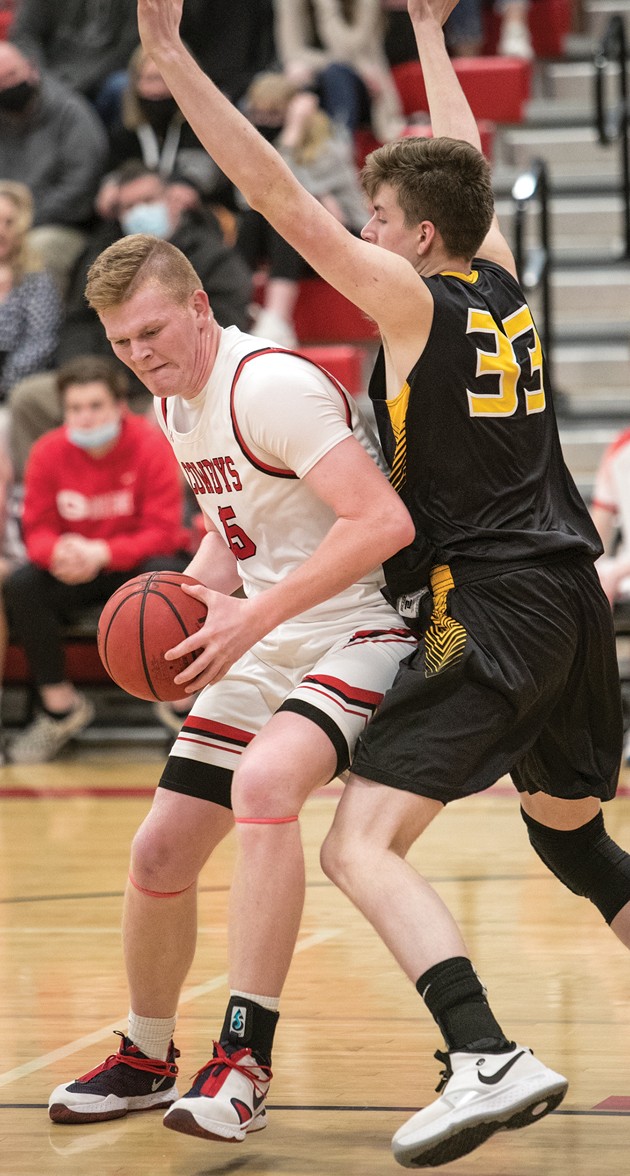 Grantsville senior Davin Ekins (15) backs in against Brett Rasmussen during Friday’s Class 3A second-round state tournament game at Grantsville High School. Ekins and the Cowboys, who are seeking their first state championship in 23 years, faced Carbon in a state quarterfinal game Thursday morning in Richfield.

For everyone else in the Class 3A state boys basketball tournament, the road to the state championship goes through top-ranked Grantsville.

For the Cowboys, however, the road to their first state championship since 1998 goes directly through Region 12. Grantsville (16-2) faced No. 8 Carbon (13-8) in a quarterfinal game at the Sevier Valley Center in Richfield on Thursday morning after press time, with a potential semifinal matchup against No. 4 Grand (20-3) or No. 5 San Juan (16-7) looming on Friday.

“I feel nervous, (but) I feel confident,” Grantsville coach Nate Austin said. “I think overall, we’re excited and we’re ready just to go play. This is the kind of test where you get to go prove that you’ve been working all season and you’re good enough to win three games. We’re ready for the competition and ready to go lay it all on the line and see if we can go get three wins.”

Grantsville’s state tournament began with a convincing 65-30 win over No. 16 Emery last Friday, earning the Cowboys a trip to Richfield for the remainder of the tournament. The final weekend of the tournament has become a familiar spot for GHS in recent years, having finished third in 2018 and fifth in 2020. Many key contributors, including Carter Killian, Tate Allred, Davin Ekins, Tuhker Mulford and Grayson McKeever, experienced that success last year and are looking to take it one step further, though their coach was cautious in his approach.

“We’ve got to be able to execute and be able to overcome adversity,” Austin said. “We have to give great energy and great effort. If we can do those things and do all the little things at a high level, I like our chances. I like the group we have. I like our players. We have a lot of good depth and guys that can do a lot of different things.”

Regardless of Thursday’s result, the Cowboys will face a tough opponent on Thursday — in a semifinal to be played at 7 p.m. if Grantsville wins, or in a consolation-bracket semifinal at noon if the Cowboys lose. Grand averages 77.8 points per game and allows 61.1, while San Juan scores 67.2 points and allows 58.3 per contest. Grantsville owns a 52-43 win over San Juan, having beaten the Broncos on Dec. 30 at the Steve Hodson Cancer Classic in Cedar City.

That said, Austin went into the weekend refusing to look past Thursday’s game against Carbon — and with good reason. Not much separated the Dinos from Grand, with Carbon losing to the Red Devils by six points on the road in Moab and by just one point at home in Price. The Dinos beat San Juan by seven points in Price, with the Broncos winning by 11 in Blanding.

The Class 3A state championship game will be played at 6:45 p.m. Saturday in Richfield. It will be preceded by the fifth-place game at 11:30 a.m. and the third-place game at 2:30 p.m. All tournament games will be live-streamed, with links available on the Utah High School Activities Association’s website, www.uhsaa.org.