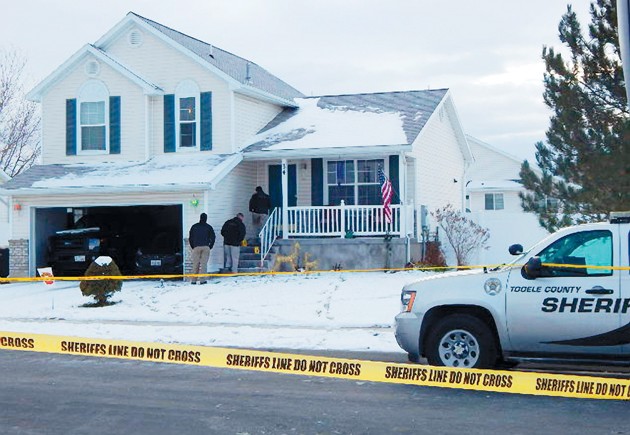 Investigators examine evidence at a Stansbury Park home where 28-year-old Nicholas McGehee was killed by a Tooele County Sheriff’s Office deputy after McGehee reportedly aimed a handgun at the deputy. The incident is being reviewed by the Utah Department of Public Safety Bureau of Investigation.

An Army veteran and ROTC instructor was killed Sunday in a deputy-involved shooting after reportedly pointing a handgun at the officer — the second incident of a police-involved fatality in both Tooele County’s modern history and the last two years.

The Tooele County Sheriff’s deputy and a trooper from the Utah Highway Patrol had responded to the house at 34 Merion Drive in Stansbury Park just after 4 a.m. on a medical call. When they arrived, they saw a man inside the home with a shotgun, said Tooele County Sheriff Frank Park.

When a woman inside the home came to the door, the deputy helped her outside and to his patrol vehicle, Park said. The man also came out of the house and pointed a handgun at the deputy, he said.

“[The deputy] protected himself at that point in time,” Park said.

The deputy fired three shots at the man, identified as 28-year-old Nicholas McGehee, killing him. Park said the three shots were the only rounds fired during the incident.

Park said the deputy has been placed on administrative leave, as per policy, until the incident is investigated by the Utah Department of Public Safety Bureau of Investigations. The deputy has been with the sheriff’s office for more than five years, Park said, and has more than a decade of law enforcement experience in Tooele County.

McGehee was an ROTC instructor at Tooele High School, a veteran of the Middle Eastern conflict, a staff sergeant in the U.S. Army and a recipient of the Purple Heart. Park said there was no record of any prior domestic disputes or other such incidents at the McGhee household.

In a year marked nationally with riots associated with lethal police force, local public reaction immediately following the incident in Stansbury Park was relatively subdued. One THS ROTC student, however, 15-year-old Jaden Brown, was honoring McGehee’s memory by handing out dogtags in honor of his former instructor.

The incident is the second officer-involved fatal shooting in modern Tooele County history. The first occurred last year in Grantsville, when an officer shot 37-year-old Travis Davis, who had made suicidal threats before an hours-long standoff with police that culminated with him pointing a handgun at another officer.

A review of the incident by the Tooele City Police Department found the officer’s actions to have been justified in that situation. That conclusion was supported by then Tooele County Attorney Doug Hogan who performed the final review of the investigation.