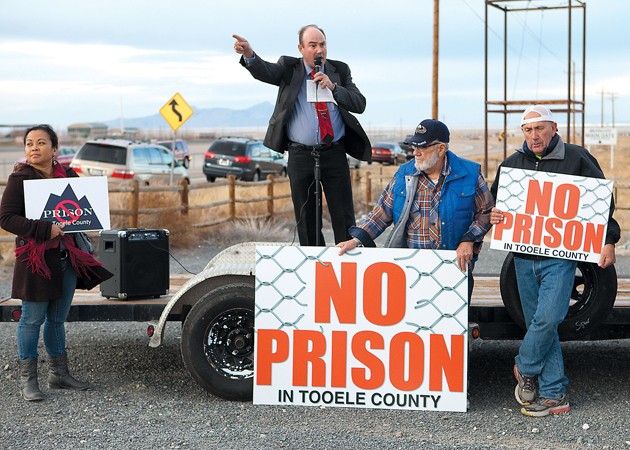 Grantsville Mayor Brent Marshall speaks in opposition of the possible move of Utah State Prison to Tooele County at a rally held on Dec. 11.

Few issues have ever unified — and divided — community leaders and residents so wholly as the possibility of relocating the Utah State Prison to Tooele County.

A legislative resolution to move the prison from its current site in Draper — a plot of land making developers in the area salivate — started the search by prison relocation consultants for a new site in the state.

A list of requirements for an ideal site included relatively close proximity to Salt Lake City and its medical facilities and courts, with existing or easily implemented infrastructure such as roads, water and sewer lines, and community acceptance.

Out of a list of 26 possible sites identified in the initial study, four were in Tooele County. The three most publicly known were all relatively near Interstate 80, though one brushed up against Grantsville’s western edge.

At the beginning of December, though, a fourth was announced as the prison relocation commission whittled down the candidates to a six-site short list.

That one has been the most controversial — 900 acres across the street from Miller Motorsports Park on Sheep Lane in Erda.

While some local officials, such as Grantsville City Mayor Brent Marshall, had spoken out against the prison before the Miller site, as it has been dubbed, rose to the top as one of the commission’s most likely relocation choices, the move incited other leaders to be vocal about their disapproval, as well as sparked citizen protests.

At a citizen-organized town hall meeting in Grantsville on Dec. 19, residents engaged in cheers such as “We don’t want no stinkin’ prison,” and Rep. Doug Sagers (R-Tooele) was drowned out by the crowd as he tried to address the audience.

At a prison relocation meeting in late December, residents gathered at the state capitol building, picketing with signs against the prison. Citizens also gathered on foot and horseback near the Miller site in mid-December to protest the proposal.

Rep. Merrill Nelson, R-Grantsville, has stated he has been working behind the scenes to ensure the prison does not come to Tooele County, and that he plans to introduce a resolution during the next legislative session that will allow the prison to stay in Draper.

The Tooele County School District has announced it plans to consider a resolution of its own that would oppose the relocation of the prison to Tooele County.

Other leaders, including Tooele City Mayor Patrick Dunlavy, Tooele City councilmembers, Grantsville City councilmembers, Stockton Mayor Mark Whitney and all current Tooele County Commission members, have affirmed their opposition to moving the prison to the Miller site. Most have also publicly voiced their opposition to the prison being relocated anywhere in Tooele County.

In late December, the prison relocation commission announced the Miller site as one of its top three sites to undergo further evaluation. However, the commission, which had gotten opposition from every other site on its short list, also announced it would accept proposals for new sites until the end of January.

Sometime during January, the commission said it would begin its public engagement plan, which would include meetings in targeted communities, public open houses, social media and electronic communication.