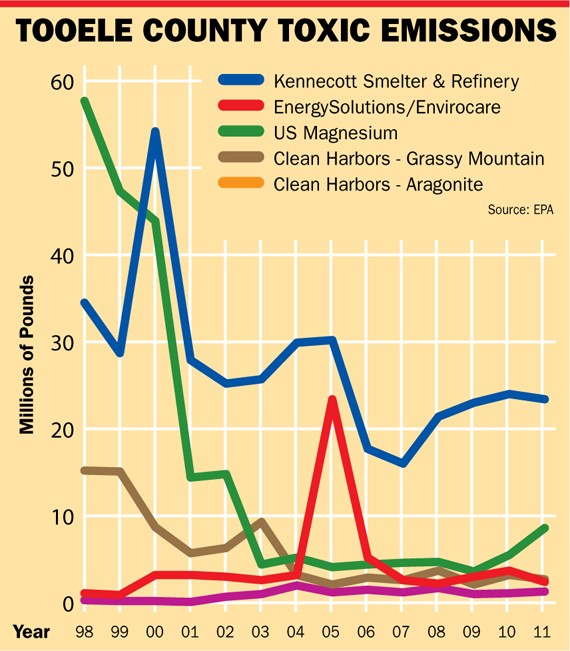 Increase largely driven by US Mag ♦

Tooele County continues to be second only to Salt Lake County in the state of Utah for emitting the most industrial pollution.

In 2011, the amount of toxic releases Tooele County companies emitted rose 12 percent, according to data collected by the Environmental Protection Agency. That is a slight increase compared to the 44 percent increase between 2009 and 2010.

The data was released to the public this month, but will not be published in the 2011 Toxics Release Inventory report until January. According to the EPA, the data contains information on chemicals and chemical categories industrial facilities manage through disposal or other releases, recycling, energy recovery or treatment.

Salt Lake County is home to Kennecott Utah Copper, which still holds the top two spots on the toxic release report for Utah. Kennecott’s mine concentrators and power plant at the south end of the Salt Lake Valley released 145.3 million pounds of toxins last year — down 10 percent from 2010 — while its smelter and refinery just east of the Tooele County line released 23.4 million pounds. The amount released by the smelter did not change from 2010 to 2011.

Kyle Bennett, spokesperson for Kennecott, said the decline is not an ongoing trend. It’s actually attributable to chemical concentrations naturally changing from year to year in the trace amounts of materials, such as lead, that are mined as overburden, or mine waste. If the concentrations decrease, then the amount of releases decreases as well.

“We move 500,000 tons of material a day,” Bennett said. “We were likely mining in an area where the [lead and other materials] were less concentrated. The trace amounts are different at various points of the mine.”

Of the total toxins released statewide in 2011, 86 percent came from these two Kennecott facilities.

Tom Tripp, technical services manager at US Magnesium, said the main reason for the increase was maintenance work done on one of the facility’s chlorine reduction burners.

“We had approximately six weeks where we didn’t have that control equipment up,” Tripp said. “That’s only happened twice since 1990. It happens infrequently and it was a major rebuild of a major piece of equipment.”

Tripp said a secondary factor behind the spike in toxic releases was a 13.7 percent increase in production from 2010 to 2011.

US Magnesium’s increased toxic releases are only a fraction of the roughly 58 million pounds of releases the company had in 1998 before it modernized its emissions systems.

Allegheny Technologies in Rowley sits at No. 85 on the list. The facility only released 940 pounds of toxic releases in 2011.

Jim Denham, spokesperson for Allegheny Technologies, said the reason the large scale metals manufacturing company releases such a small amount of toxins is because most of the chemical processes take place before the metals gets to the facility in Rowley.

“However, we do take a lot of care in making sure our environmental impacts are kept to a minimum,” Denham said.

Other facilities in Tooele County listed in the report include the Tooele Army Depot, Dugway Proving Ground, Cargill Salt and Hunter Panels. More information about the Toxics Release Inventory report can be found at www.epa.gov/tri.