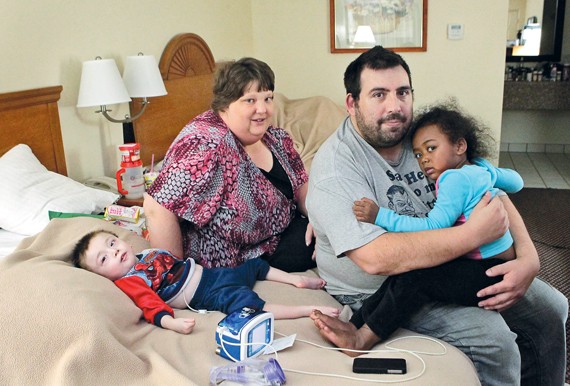 Skyler, Stacy, Jonathan and Halay McCracken pose for a photo at their motel room at the Best Western Inn Wednesday afternoon. The McCrackens have been chosen as this year’s Transcript-Bulletin Christmas Benefit Fund family.

Jonathan: “Everything’s just been a perfect storm — it just keeps piling and piling and snowballing.” ♦

Jonathan McCracken and his son, Skyler, were back in the hospital today — a place the two can’t seem to get away from. In the past two months, the McCrackens have spent almost as much time in hospitals as they have in hotel rooms.

Jonathan, 39, said the family’s recent misfortunes have been nearly overwhelming.

“It’s been our own little Superstorm Sandy just swirling around us,” he said.

The McCrackens have been chosen as the Transcript-Bulletin Christmas Benefit Fund family for 2012. With the help of the newspaper and its readers, the family’s Christmas can hopefully be a little more merry and bright.

Skyler has Menkes Disease, a rare genetic condition that affects motor and developmental skills and leaves him susceptible to infection and respiratory ailments. Jonathan said Skyler often becomes congested in the winter, and requires some of that congestion to be suctioned out. Sometimes, though, like today, the congestion is more than the little suction unit the McCrackens have can handle.

Skyler was also hospitalized last month because he had become dehydrated after getting a stomach flu. A degenerative disorder, Menkes Disease is a rare copper deficiency where the body cannot properly transport and distribute copper throughout the body. The progressive buildup of copper in the brain impairs Skyler’s motor functions, as well as basic skills like being able to swallow.

“There’s a chance that if he learns a new ability, the brain damage will take it away,” Jonathan said.

The McCrackens adopted Skyler in December 2009, soon after he was born two months premature. When he was six months old, the McCrackens noticed that he was a little behind developmentally, such as not being able to roll over or keep his head up. They were also curious about his odd hair — the hair on top of his head was long and blonde, while the hair to the back of his head was short, black and brittle.

Genetic testing revealed that Skyler’s problems were due to Menkes Disease, which only affects one in 350,000 males and can only be passed on by the mother. Skyler has received copper injections to help counteract the symptoms, and has improved some, but because of his difficulty swallowing he is still fed through a tube. Wintertime is often difficult for him because he easily gets congested and the excess mucous must be removed with a suction machine, Jonathan said.

Skyler’s third birthday is three days before Christmas. When Skyler was first diagnosed, Jonathan said, doctors estimated Skyler only had two to three years to live. More recent estimates have extended his expected lifespan a bit, Jonathan said, though that heavily depends on the rate of Skyler’s degeneration.

“The prognosis, it doesn’t change,” Jonathan said. “Now they’ve kind of extended it to where they think he might live up to 10.”

Besides Skyler’s chronic medical concerns, Stacy has had problems of her own. She was hospitalized twice before doctors discovered she had pneumonia. On top of that, they found her kidney — a transplant — was in the early stages of rejection.

She was released from that two-week hospital stay a week ago. She still coughs and wheezes a bit, as she fights to clear out the last of the effects of the pneumonia, and now she goes into a hospital in Salt Lake three times a week for dialysis to head off the effects of the kidney rejection.

This is Stacy’s second kidney transplant. The first she received at 16 in 1993. Ten years later, when that kidney was rejected, Stacy got another transplant.

Kidney transplants have a lifespan of about 10 years, she said. Her doctor said she is still young enough she should be eligible to be placed again on the waiting list for a donated kidney — though now she has to get over a couple of health problems, including her pneumonia. During one of her hospital stays last month, Stacy also got blood clots.

“I have to get my health back in check,” she said. “It’s just a matter of when they get a kidney or if a [donation from a] family member works out first.”

Because of Skyler’s and Stacy’s ailments, the mold that grew in the wake of the leaky dishwasher was more dangerous than it would ordinarily be to healthy people. The family moved into the Holiday Inn while repairs were done to their home. After two months, the family had to move into the Best Western because the Holiday Inn was booked. With the influx of holiday traffic, the McCrackens will now be changing hotels once again on Friday, and their home is still inhabitable. Although homeowners’ insurance is covering the cost of the repairs, the work is slow going.

In early November, Jonathan, 39, got word that his father, whom he had never met because he was raised by a single mother but had been trying to track down, had passed away.

Between Stacy’s and Skyler’s ailments and the problems with the house, Jonathan is almost out of unpaid family medical leave at his job at Detroit Diesel, though the company has been very cooperative and understanding, he said. The family has health insurance, but the bills for the hospital stays and Stacy’s dialysis have not yet come, and the financial strain has already put them nearly three months behind on their mortgage payment.

“Everything’s just been a perfect storm — it just keeps piling and piling and snowballing. I keep thinking, ‘Nothing else can happen,’ and then it does,” Jonathan said. “I’m hoping we’re getting to the end of it.”

Three-year-old Haley, whom the McCrackens also adopted as a baby, has mostly kept to herself, Jonathan said, and has been good throughout the chaos.

“She’s just a normal 3-year-old, just being herself,” he said. “She’s been trying to help her mom.”

On the McCrackens’ wish list is a medical stander, a device that could be used to help build muscle tone in Skyler’s lower body. Jonathan said because the mold in their house also came into contact with some of the family’s linens and towels, replacing those would be appreciated, as well.