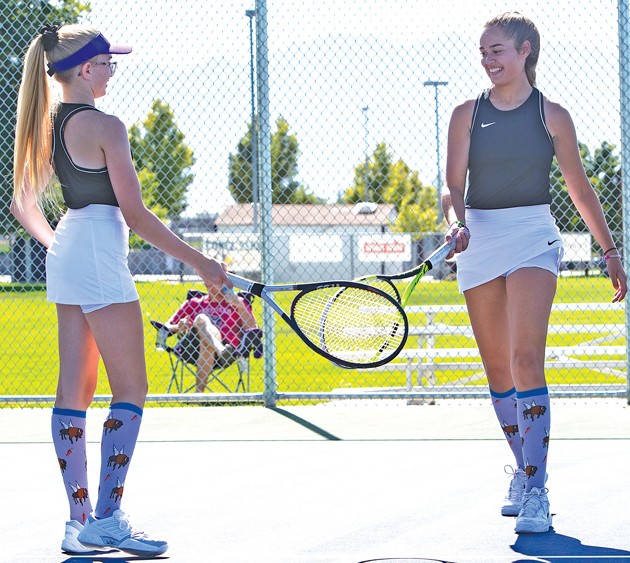 First Doubles Kammy Hamilton and Taya Unruh prepare for a match at the 2019 Transcript Bulletin Tennis Tournament. The tournament returns to the court Friday and Saturday, July 22-23 at the Tooele High School.

A good way to see how your tennis game compares with other players in the county is to enter the Transcript Bulletin Tennis Tournament and play a few matches this Friday and Saturday, July 22-23 at the Tooele High School tennis courts.

Players may enter the tournament by stopping by the Transcript Bulletin office at 58 North Main Street to fill out an entry form. Or they can call tournament director Jerry Harward at (801) 502-5193. Harward is an assistant tennis coach at Tooele High School and an avid tennis enthusiast who has volunteered to run the summer tournament.

This tournament was canceled the past two years because of COVID, but is back in full force this year.

Players are allowed to participate in two events with an entry fee of $20 for the first event and $5 for a second event. If a whole family wants to participate, a $50 fee will cover all members of the family.

Nielsen said categories are not set in stone and brackets may be adjusted according to who enters the tournament and their skill levels.

“We usually take the entries and adjust things to make it competitive, fair and fun for everybody. Sometimes we add some mixed doubles matches which are always fun,” Nielsen said.

Tournament draws will be posted at the THS tennis courts by 8 a.m. Friday, July 22. Official check-in and match play will begin at 3 p.m. Friday and run until dark. The tournament will continue on Saturday at 8 a.m.

The tournament director will attempt to accommodate players wishing to compete in two draws. Some draws may be combined on the number of entries.

Chris and daughter Kayla Johnson of Grantsville are two top players who have participated in the tournament for several years. Kayla won the women’s singles title for the third consecutive year,in 2019 and teamed with her father to defeat Josh and Camdin Nelson in a three-set battle for the doubles championship. Back in 2019, Tytan Thurgood beat Camdin Nelson to win the men’s singles title. In the intermediate bracket, Seth Hunter beat Danson Coats 8-3 in a pro set.