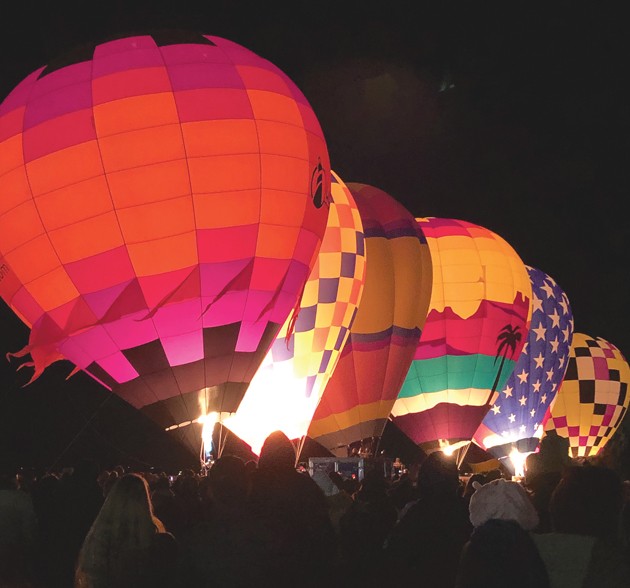 Hot-air balloons prepare to launch during Morning Glow at the Albuquerque International Balloon Fiesta on Oct. 12 in Albuquerque, N.M. Transcript Bulletin sports editor Darren Vaughan traveled to the Land of Enchantment earlier this month to visit his parents, enjoy some authentic New Mexican cuisine and get in touch with his Latino roots.

October 31, 2019
Traveling leads to family, food and a history lesson

As soon as my parents told me they were leaving my hometown of Moab for greener — and cooler, and cheaper — pastures in the mountains of New Mexico, I knew I’d be making the trip to Albuquerque sooner rather than later.

Sure, I wanted to spend time with them — that was the primary reason. However, having lived in the northwest corner of the state for almost four years after graduating from college, I couldn’t help but feel a connection to the place. I developed an affinity for green chile over the years, and my license plate at one time featured a hot-air balloon. My grandparents lived along the Rio Grande in the heart of Albuquerque for several years, as well, meaning I spent a fair amount of time in the Duke City.

But there was more to this trip than I ever expected.

Even though I’ve lived in Utah more than I’ve lived anywhere else, I’m not really from here — my parents moved to Moab from Colorado when I was seven years old; my dad is originally from Texas and my mom was born in California to parents from New Mexico. And it was that New Mexican heritage that came right out into the open over the span of one weekend.

When I lived in the Land of Enchantment, I was in my early 20s. That meant anything educational kind of fell by the wayside as I wanted to experience true adulthood and all that it would bring. I knew there was a strong connection to New Mexico on my mom’s side of the family, but I didn’t realize just how strong it was and how deep it ran.

And, here I thought it was all about the food. I’ve eaten more than my fair share of red and green chile, posole and beans over the years. My grandfather once taught me that a bowl of posole and red chile was the perfect remedy the morning after a late night in college. The food is, to put it lightly, really, really good.

But to know that this is where my family is from? Now, it’s more than just a foodie’s vacation dream-come-true. Several generations of my mother’s family are all buried in the same cemetery in Belen, New Mexico. My great-grandfather’s name is etched on a memorial in Albuquerque, dedicated to those who passed away in the Bataan Death March during World War II.

And what tied it all together was a trip through the New Mexico History Museum in downtown Santa Fe. The stories I used to hear from my grandfather about growing up in New Mexico were brought to life, and I could even tie them back to things I learned while taking Spanish and Latin American history classes at the University of Utah over the past few years.

My dad has also done his homework when it comes to my mom’s family tree, so there were people in my family tree who were fairly prominent in the settling of the New World — and modern-day New Mexico, in particular — after coming from Spain in the early 16th century.

There were other things that made me feel at home, as well. In New Mexico, there are a lot of mixed-race people who look a lot like me — and they all speak with the same slightly Spanish-tinged accent my grandfather did. It’s the same accent my uncles have, as well.

I even had to bring some jars of green chile and red chile back with me, as well as some tortillas. I have a feeling those won’t last long. But, my family connections are forever. I’ll be back.

Darren Vaughan is the sports editor for the Transcript Bulletin. He looks forward to learning more about his family history in the years to come. Email him at dvaughan@tooeletranscript.com.