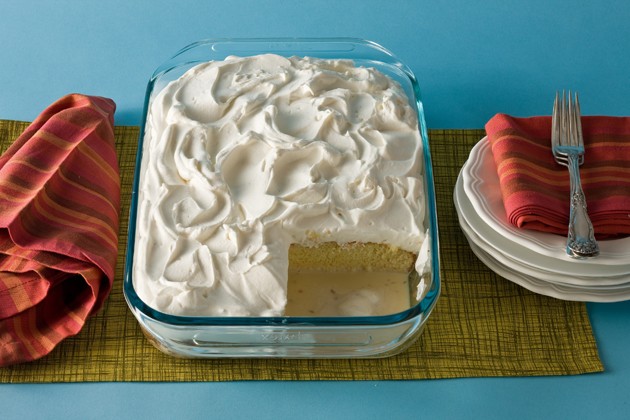 Cinco de Mayo (the 5th of May), a celebration of Mexican pride in the southwestern United States and Mexico, is practically synonymous with margaritas, tacos and the famous super-moist cake known as Tres Leches (Three Milks) Cake.

The holiday commemorates Mexico’s victory over the invading forces of French Emperor Napoleon III at the Battle of Puebla in 1862. Holiday traditions include parades, folk dancing, mariachi music performances and street festivals. As with any holiday, food plays a big part in the festivities, and what’s a celebration without cake? Although Tres Leches Cake draws on influences from other areas of Latin America, such as Cuba and Costa Rica, it was adopted into Tex-Mex tradition more than a generation ago—just in time to become a favorite during this revitalized holiday.

After the milks are poured over the top, the cake is chilled until it soaks up most of the liquid. Then sweetened whipped cream is spread over the top. Serve the cake on top of extra milk mixture.