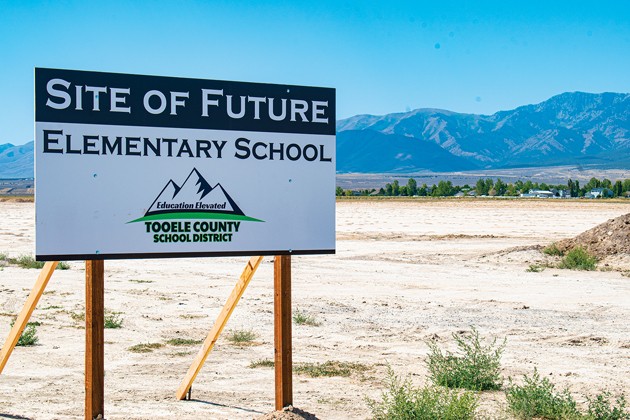 The Tooele County School District bought property in June at the intersection of Worthington and Nygreen streets in Grantsville for a future elementary school.

February 25, 2021
Twenty Wells School will spring up in Grantsville

If your children will go to the new elementary school to be built at the intersection of Worthington and Nygreen streets in Grantsville, they will attend Twenty Wells Elementary and be known as the green and black tigers.

The Tooele County School District Board of Education approved the name, mascot, and colors for the new school during the board’s work session meeting on Tuesday night.

The school district collected suggested names from the public through an online survey.

Some of the suggestions for school names included the names of people; Hilda Ericksen, Robert ‘Cowboy Bob’ Lawrence, and Clark Imlay.

Board member Scott Bryan said that recently the practice has been to name a new school after an historical or geographical feature in the area.

That practice helps people from outside the area to have an idea of the location of the school from the name. Naming schools after people — Sterling Harris Elementary, Anna Smith Elementary, and Clarke N. Johnsen Junior High — has been the exception, he said.

During the discussion while trying to narrow down the list of prospective names it became apparent that Twenty Wells was a common preferred name for the school among board members.

The board approved the name Twenty Wells.

“Twenty Wells may not be as well known,” said Melissa Rich, board chairp[erosn. “But it will give people an opportunity to learn about the community.”

Twenty Wells is a historical name for the area near where the elementary school is being built, according to school board member Bob Gowans.

According to a history of Twenty Wells, the name is associated with an area on the south end of present day Grantsville. Overland parties in the 1800’s found relief at the location.

The place got its name from a series of holes in the ground that were filled by water from underground springs, according to overland emigrant and early historian Jessy Quinn Thornton.

Reportedly, there were 20 of these holes. They were around six to nine inches in diameter and they were up to 70 feet deep. They refilled themselves with fresh cold water, but did not overflow.

The school board did not discuss or take action on the names of the new junior high on Bates Canyon Road or the new high school to be built west of the Home Depot store in Tooele City.

When they do, some of names suggested by the public for the new junior high included; Brine Shrimp, Stansbury, Adobe Rock, Bates Canyon and Oquirrh Mountain Junior High School.

One survey respondent commented, “Please do not name it Overlake High — Overlake is a development area of Tooele and this would just further divide our City.”

Another said, “The other schools are all city names. It’s kind of hard to name it Overlake High School, after an area of Tooele, but it’s also kind of weird to have North High School or East … Is there even a lake in Overlake?”