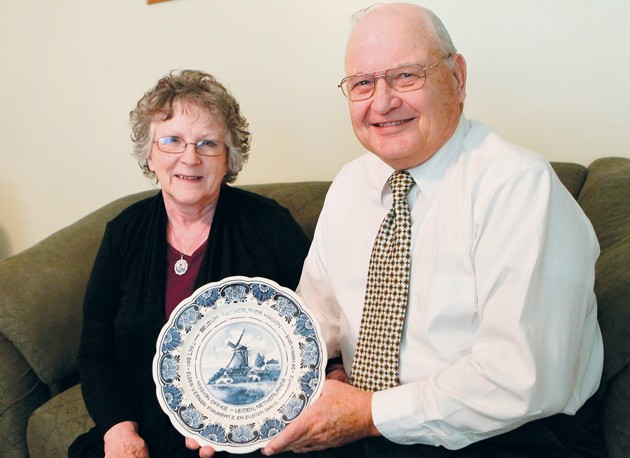 Diane and Vernon Pankratz sit with a Delft plate from their recent LDS mission to the Netherlands at their home in Tooele.

For Vernon and Diane Pankratz, their second mission for The Church of Jesus Christ of Latter-day Saints was déjà vu all over again.

A little more than five months after returning from their mission to the Netherlands, the Tooele couple found themselves back on a plane to the land of tulips and windmills.

“This was a surprise,” said Diane.

A few months after returning from their 22-month mission to the Belgium Brussels Netherlands mission, the Pankratzes were talking to a senior missionary couple still serving in the area. During the course of the conversation, the other couple asked the Pankratzes to come back and serve in the mission office, since the mission was having trouble filling that position.

Soon after, the Pankratzes received a phone call from the LDS mission department telling them how to actually get an official call back to the same mission. This series of events is highly unusual for prospective missionaries, Vernon said.

“Normally, you put your papers into church headquarters and wait to see where they’ll send you,” he said. “But there are occasions when the church asks you to go somewhere.”

Having a call and a plan to go back were one thing, but the Pankratzes also had to consider the nuts and bolts of going back. Their first mission had been funded through their savings and profits from their popular Pankratz Pumpkin Patch in Tooele. This time, though, those resources were depleted.

“When we got called to go back, we were going to have to sell our house because we used our savings the first time,” Diane said.

However, she said, a neighbor, who preferred to stay anonymous, made it possible for them to afford the cost of going on a mission. Because of that neighbor, she said, the Pankratzes were able to serve their second mission and have a home to come home to.

“We were so grateful,” Diane said. “It made us feel like we’d better work really hard.”

And work hard they did. The Pankratzes said the only sight-seeing they did was along the way when moving apartments. Diane said she quickly became very good at taking pictures out of the window of a moving car.

The couple spent the entire 18 months of their mission working in the mission office, unlike in the first mission, when they spent 14 months working in the office and the other eight working with young adults. Vernon was over managing the approximately 50 missionary apartments in the mission, the phones used by each pair of missionaries, mission vehicles and other duties as given by the mission president, while Diane’s purview included supplies, letters and postage, and referrals of potentially interested people to the missionaries.

“You could say we were the logistic part of the mission,” Vernon said.

In the early months of the mission, the Pankratzes taught Institute classes in addition to their mission office duties, but had to give it up because the tasks at hand were too demanding. Where during their first mission they had to close 15 apartments because of a lack of missionaries to fill them, during this go-around they opened about twice that. In the Netherlands, renting an apartment often requires the renter to furnish the place — including flooring and curtains — so getting that many apartments set up took some work. After doing that plus their daily duties, teaching Institute was just one thing too many.

“We just got too tired,” said Diane. “At the end of the day we’d just be exhausted.”

The Pankratzes worked hard, but they also seemed to get tired more quickly than during their first mission, said Vernon, probably due to them being just that much older than the last time.

“We still worked really hard,” he said. “We just couldn’t work that hard for as long.”

Things were more tumultuous at home, too. A year into their second mission, Diane’s father passed away, and a few months later, his twin sister died, too. And then, a few months ago, the Pankratzes’ youngest daughter was diagnosed with cancer. Diane said although they were worried about things going on at home, they felt they were where they needed to be.

“We were able to work and carry on in spite of it all,” she said. “It worked out.”

Now back from their second mission, the Pankratzes said they wouldn’t rule out the possibility of going on another mission, but they’re not planning on one right now. Besides, they said, they’ve got their work cut out for them close by right now.

“We’ll never rule out another mission,” Vernon said. “There’s a lot of need in the local area that will keep us busy. Neither one of us is the type to just sit around watching TV.”