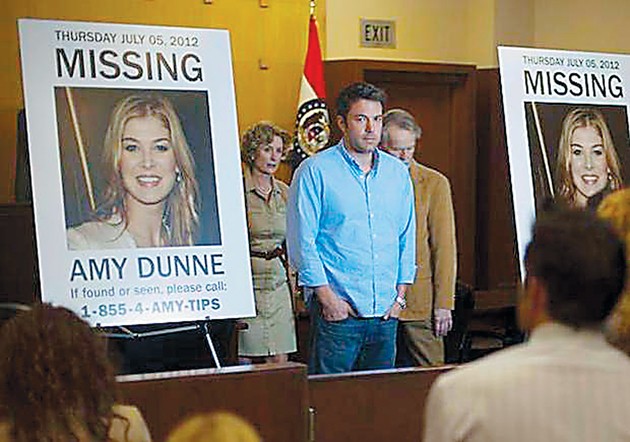 October 2, 2014
Twisted yet masterful ‘Gone Girl’ not for the faint of heart

In the acknowledgment section of one of her books, Gillian Flynn thanks her husband for knowing how twisted her mind is and still sleeping beside her with the lights out.

That is one brave, brave man.

The film adaptation of Flynn’s “Gone Girl” is every bit as disturbing as the book, which means I have now missed out on two nights of sleep thanks to that deeply troubled woman.

Ben Affleck stars as Nick Dunne, an ex-writer turned bar owner, who comes home on his fifth anniversary to find his wife, Amy (Rosamund Pike), missing and their house in disarray. As police begin to look for clues, the investigators (Kim Dickens and Patrick Fugit) begin to doubt Nick’s questionable alibi and suspect he knows more than he’s letting on.

The small Missouri town becomes a media circus, and Nick is first pitied and then vilified as the story of their fairy-tale romance unravels, leaving only his twin sister, Margo (Darrie Coon) and high-powered attorney (Tyler Perry) on his side. Meanwhile, a brief appearance by a former — and unstable — flame of Amy’s (Neil Patrick Harris) adds another mysterious piece to a puzzle that seems at odds with itself.

Between Flynn’s own screenplay adaptation and David Fincher’s canny directing, “Gone Girl” patiently doles out its story piece by piece — at times even toeing the line between restraint and dragging — stringing along even viewers who are expecting the plot twists. And for the portion of the audience who has read the book, Flynn has tweaked the ending just slightly.

The at-times incredible story is given more credibility by a cast that is phenomenal across the board.

Seriously, this cast hits it out of the park. I don’t think I’ll ever be able to watch 2005’s “Pride and Prejudice” the same way again after seeing Pike in this role. And Affleck … isn’t he supposed to be not that great? And Perry, Dickens, Harris and Coon, along with supporting players David Clennon, Lisa Banes and Sela Ward, fill out the screen nicely as well.

Here’s the thing: “Gone Girl” is not a happy story. At no point will you think “Gee, this is a real nice time we’re having.” It will give you a complete escape, but it is not entertaining like going to a circus or puppet show might be entertaining. When the credits rolled, there was this collective “What the [expletive deleted]” from the critics section. I, personally, left the theater vowing to sequester myself from people and become a hermit.

“Gone Girl” earns its R-rating almost immediately with profanity and then drives the point home with some pretty graphic sex and violence. So between that and the immensely disturbing subject material, this is not for the faint of heart. But it is masterfully done.