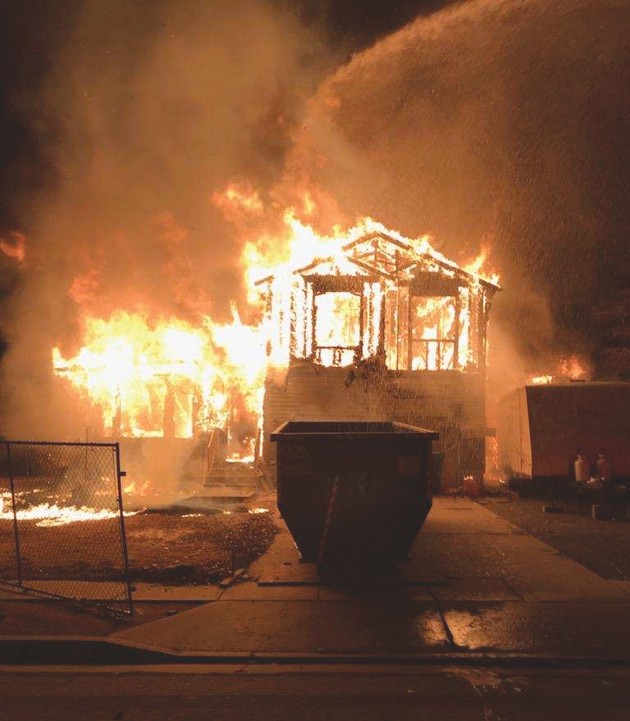 Flames engulf a home on 200 South in Tooele City on Saturday morning.

The first fire occurred on Saturday morning in Tooele City.

Firefighters were dispatched to 200 South 950 West in Tooele City on Saturday at 6:15 a.m., according to Chris Shubert, Tooele City fire chief.

When they arrived, they noticed the home completely engulfed in flames.

“We had to set up a defensive attack and structure protection for the house to the south,” said Shubert. “The siding on that house was starting to get a little hot.”

At 6:45 the firefighters had the fire out, but they were on scene until 11:00 a.m. to mop up and wait for the state fire marshal to come out to investigate.

Shubert said that firefighters believe the fire began in the main living area of the house, which was vacant, because of another fire at the same location in September.

Because of the fire Saturday and the fire in September, the entire house was damaged, according to Shubert.

“The restoration from the September fire had not been completed yet,” he said. “So, there weren’t any contents, or sheetrock, or anything in the house. It was stripped down, because of the last fire.”

The cause of the fire is still under investigation.

No injuries were reported due to the fire.

The house to the south now has melted siding because of the fire.

When they arrived on scene, they noticed smoke coming out of the front of the house.

A few minutes after arriving on scene, firefighters were told by a woman who pulled up to the house that her husband was inside.

“We were setting up to do an offensive attack when the homeowner arrived on scene in her driveway and told us that her husband was trapped inside,” Shubert said. “He could not get out on his own. At that point, we separated our crews, putting one on extinguishment and one on rescue. We sent them in to do a search and extinguish the fire.”

Firefighters found the trapped victim on the second floor of the house.

“They were able to get him out safely to the ambulance,” said Shubert.

The fire was extinguished by 3:25 p.m. and firefighters remained on scene until 7:00 p.m. waiting for a fire investigator.

The fire started in the living room area and the cause of the fire is unknown at this time, according to Shubert.

Very little fire damage was done to the house but the smoke damage was extensive, according to Shubert.

The man who was trapped in the home received injuries, but the injuries that he received are unknown at this time.

No other structures were damaged.