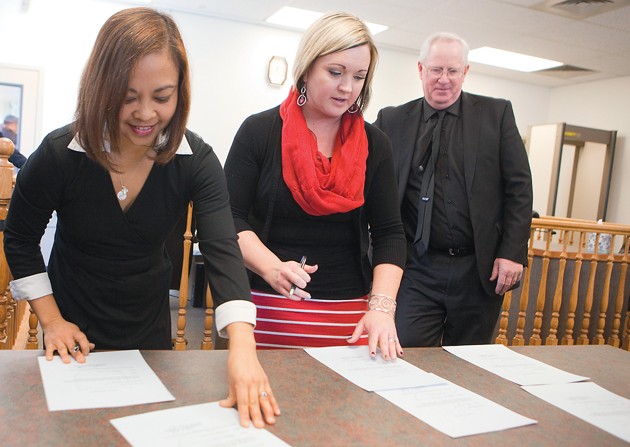 “It was a little exciting for me to see this come to fruition finally,” Sparks said.

With “deep roots” in Grantsville, Sparks said she’s prepared to take on the hard challenges facing the city. She said she’s been talking with Allen as they start in their new role.

Sparks also said she’s excited for her proposed council assignment as liaison with the board of directors at the Utah State University Tooele campus as an alumni of the university and a teacher.

Allen said she enjoyed the swearing-in ceremony and said being elected to office showed Grantsville residents have faith she can do the job.

“It’s really quite a privilege to have people’s trust that I’ll uphold the Constitution,” she said.

As one of the newest members on the council, Allen said she plans to learn as much as she can from her fellow councilmembers as she adjusts to her new role.

For Critchlow, it’s back to work for another term on the city council.

“I appreciate the confidence of the people of Grantsville,” he said.

Critchlow said he’s looking to ensure responsible growth with a number of significant housing projects under development in the city. Developers will need to step up to ensure infrastructure is improved to meet the needs of the new housing, he said.

In the 2015 election, Sparks led all candidates with 815 votes. Critchlow and Allen finished with 785 and 757 votes, respectively, with Stice receiving 705 votes.

The new Grantsville City Council will hold its first meeting of 2016 this Wednesday at 7 p.m. in City Hall.