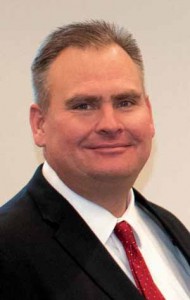 Ask Tye Hoffmann why he ran for County Council and you will get a quick answer — “taxes and to serve and be involved in my community.”

He was also elected by the council members as the County Council vice chairman.

A Republican, Hoffmann, who lives in Erda, won the 3rd District election with 67% of the vote.

Hoffman moved to Tooele County in 1999. At that time he worked for Fidelity Investments in Salt Lake City. He commuted to work.

“I told my wife that I was a country boy that grew up in a small Utah town, and I was not living in Salt Lake,” he said.

Hoffman grew up in Liberty, near Huntsville in Weber County.

In 2002, Hoffmann quit commuting and opened up the Tooele office of the financial services firm, Edward Jones.

“I was working at McKay-Dee Hospital and several doctors discouraged me from becoming a doctor. ‘It’s not what it used to be,’ they told me,” said Hoffman.

So, Hoffman headed to Utah State University and started to work on an MBA.

“I never finished,” he said. “I got hired by Fidelity. They paid for my license and part of the idea of working for them was they would help pay for my education, but I started earning enough that I didn’t need a degree.”

Hoffmann’s community service to Tooele County includes actively participating in the Tooele County Chamber of Commerce. He served as the chair of the Chamber’s board of directors in 2017.

The change in form of government for Tooele County made it possible for Hoffmann to run for County Council, he said.

“I would not have been able to serve as a full-time as a commissioner,” Hoffman said. “But a part-time council member is something I can do. I have flexibility with my schedule at work that allows me to do it.”

Taxes are a big reason why Hoffman decided to run for County Council, he said.

“I’m not a big fan of taxes and I’m not sure who is,” he said. “But the County is always looking to taxpayers, but I think we should look at other solutions.”

During his campaign, Hoffmann said he is for “smart, controlled, well-planned growth.”

Living in and representing Erda, Hoffmann has a firm idea of what that kind of growth looks like to him.

“Erda is kind of the last hope for open space in this valley,” he said. “I want to preserve as much of that as possible.”

Maintaining 5-acre lots may not be possible in all of Erda, Hoffman concedes, but he wants to keep Erda as rural as possible.

“Erda should be maintained as more rural and open space,” he said. “We don’t know yet how incorporation and all the annexation requests will affect that.”

While not sure that Erda can keep hold of all of its 5-acre lots, Hoffmann throws an idea for a 10-acre lot development in Erda.

“How about a 10-acre lot development with maybe a private airport,” he said. “Attract the uber wealthy. We have a race track that has brought millionaires and billionaires to the County.”

Hoffman wants to change the mindset of who the county appeals to.

Using Moab as an example, Hoffman said that tourism increases rental properties, people come for the weekend and then go home — they don’t add kids to schools or cars commuting to work on weekdays.”

In his spare time, Hoffman said he enjoys boating and waterskiing, with Pineview Reservoir and Lake Powell being his favorite locations.

Hoffmann and his wife, Shauna, have five children and one grandchild.

“I have an open door policy,” Hoffmann said. “I want to listen to people and they are welcome to reach out to me.”