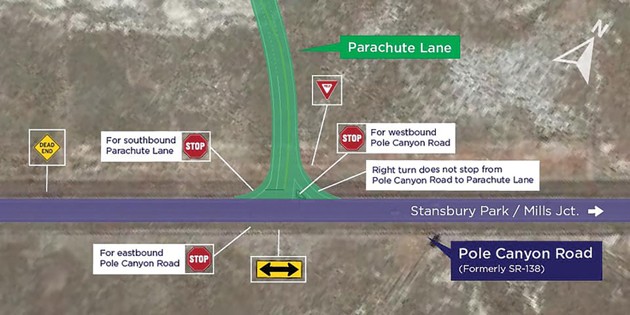 Crews have been working on improving the intersection of Pole Canyon Road and Parachute Lane, south of the Midvalley Highway, by installing stop signs to make the area safer for drivers.

On Jan. 8, the Utah Department of Transportation began pouring the cement for three stop signs: one for westbound traffic on Pole Canyon Road, one for eastbound Pole Canyon Road, and one for southbound Parachute Lane.

“While future development plans in this area will change the access and movements at this intersection, these enhancements clarify required stops for all directions of traffic,” said Courtney Samuel, senior communications manager at UDOT. “Vehicles have been observed going west on Pole Canyon Road to the dead end inadvertently and turning around. Also, vehicles traveling south on Parachute Lane are expecting westbound traffic to turn onto Parachute Lane, and they don’t always turn. These enhancements aim to keep everyone safe at this intersection.”

The changes will do more than prevent accidents.

The west leg of this intersection acts primarily as a driveway for the existing property owner, but public traffic has also been accessing the road. Adding these stop signs clarifies how access is allowed to function and provides for safe traffic movements for all.

Members of the community have asked UDOT why they won’t install a traffic signal at the intersection of Midvalley and Parachute Lane.

“At any intersection, signals are installed only based on a rigorous process that includes many criteria,” Samuel said. “The traffic load and movements in this area do not warrant a signal and the intersections are designed to function safely for motorists who are obeying signage and speed limits.”

For a traffic signal to be effective, it requires a consistently high volume of vehicles traveling different directions through an intersection, according to Samuel.

“The main movements at the intersection where we are installing the stop signs are southbound traffic on Parachute Lane turning left onto eastbound Pole Canyon Road and westbound traffic on Pole Canyon Road turning right onto Parachute Lane,” Samuel said. “A signal would not improve safety or traffic flow for these two main movements. All of the traffic movements at the intersection do not have a high volume of traffic at this time. A three-way stop more efficiently addresses safety and traffic flow than a signal would. Currently, a signal is not warranted due to these conditions and low traffic volumes in this area.”

Along with the stop signs, UDOT plans to install cameras and an electronic highway message sign to integrate Midvalley into UDOT’s statewide traffic management system.

“Due to supply delays, we are waiting on that equipment to arrive and will install it as soon as possible to enhance the management and safety of the roadway,” Samuel said.

UDOT officials said the improvements will help them communicate travel impacts to the public quickly.

“UDOT is committed to the safety of the traveling public and will continue to actively monitor traffic conditions in this area,” said Samuel.