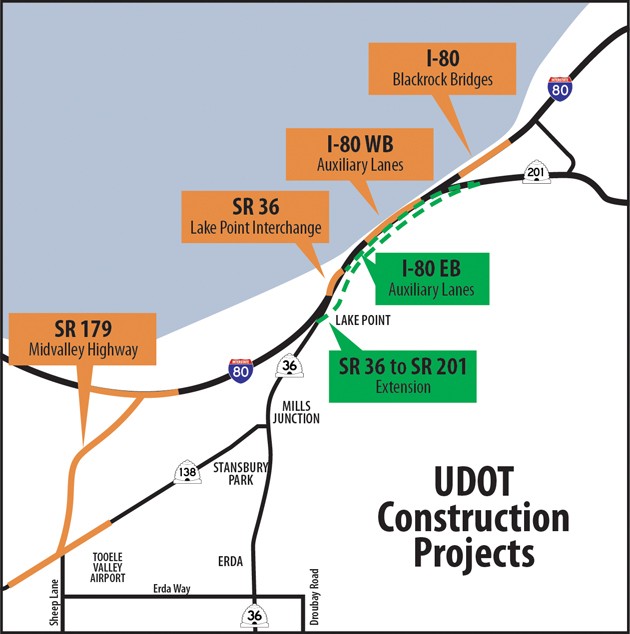 A Utah Department of Transportation representative spoke with members of the Tooele County Council of Governments, detailing future construction projects and studies during its meeting last Thursday.

Grant Farnsworth, UDOT Region 2 planning manager, handed out an informational sheet containing construction projects and performance measures for the county at the COG meeting. He said the sheet has also made the rounds throughout the state, including at the state Capitol.

Funded projects on the horizon include completion of the Black Rock and state Route 36 overpass bridges, the creation of a westbound auxiliary lane on Interstate 80 and the Mid-Valley Highway.

The $45 million bridge replacement plan includes the reconstruction of two railroad overpass bridges at Black Rock and the highway overpass bridge at Exit 99. The project, which has been underway since early 2018, also includes the creation of a third southbound lane on SR-36 from Hardy Road to Sunset Road.

The $3 million I-80 westbound auxiliary lane will run from the state Route 201 ramp to the SR-36 interchange, which will improve weaving from vehicles getting onto the interstate, according to UDOT. The project is funded and in the design phase, with construction set to begin in 2020.

The Mid-Valley Highway, designated state Route 179, will connect from I-80 to state Route 138 near Sheep Lane. The $75 million project was recently put out to bid and a 425-day contract was awarded to Ames Construction of West Valley City, according to Tooele County Commissioner Tom Tripp.

If all goes as planned, the first phase of the highway will be completed by early December 2020, Tripp said. UDOT expects the new highway will shift 15-20% of the traffic away from SR-36 while creating a nearby alternate route to I-80 if there is a closure on SR-36.

In addition to the three announced projects, there is another $33.5 million slated to be spent to repave state Routes 36, 73, 138 and 112 between 2019 and 2021. Farnsworth said the repaving of SR-138 will occur as two projects, with one encompassing the route between I-80 and Grantsville and the other between Grantsville and SR-36.

Two unfunded projects were also mentioned at the COG meeting, including an extension from SR-201 to SR-36 and an I-80 eastbound auxiliary lane.

The SR-201 extension is earmarked for $200 million, though Farnsworth clarified the amount is a placeholder with the project still in the conceptual phase. The extension would provide an alternate route for I-80 commuters if there were closures due to a crash.

“As you get with the smaller amounts, we’re able to find other pots of money, rather than just the transportation investment fund,” he said.

A pair of studies will also be conducted in the near future to better understand some of the transportation issues in Tooele County.

The Tooele Transit Study will start next month, which is expected to take a look at short-term and long-term solutions for serving Tooele County through public transit.

Another study, the Northeast Tooele County Area Study, is expected to begin in a few months, through a partnership with Tooele County, Tooele City, Grantsville City, Utah Transit Authority and Wasatch Front Regional Council. The intent of the study is to look at solutions to mobility challenges in the county over the long- and short-term.

The performance measures provided by Farnsworth included a look at daily traffic by the number of vehicles on I-80, which has increased 6% over the last six years. Utah is experiencing yearly traffic increases of 4-10% in high growth areas, according to UDOT.

Two community members spoke during the COG meeting. Chad Whitehead said he was frustrated by the commute he had to make to his former job in Draper, which could last two hours due to traffic on I-80 and Interstate 15. He said the COG meeting was a good learning experience for what the government is trying to do, but he’d like to see something done quicker.

Ruth Jones, a Tooele resident, also spoke and expressed similar frustrations with the length of commutes due to traffic.