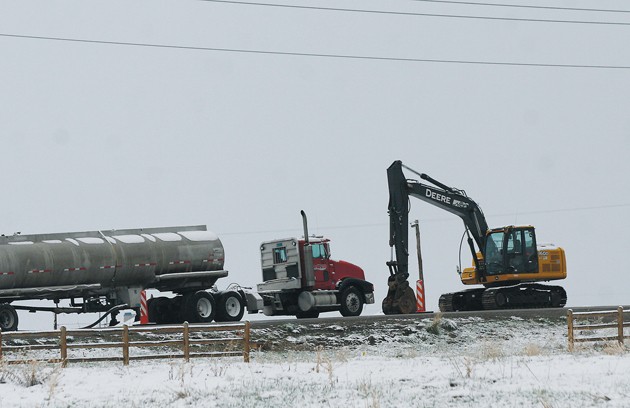 April 16, 2013
UDOT will start many new road projects this year

Several Utah Department of Transportation construction and safety projects will take place on Tooele County roads this spring and continue through 2014.

The first new UDOT improvement project county residents will notice is the installation of driver feedback signs on SR-36 in Lake Point. The signs automatically radar motorists as they drive by and flash how fast they are traveling.

“Those signs should be installed within the next couple of weeks,” said Robert Miles, Region 2 traffic operations engineer. “We’ve had them tested and they’ve been calibrated. They will be solar-powered signs.”

“[Heading northbound,] one will be up right around the speed limit change [from 60 to 55 miles per hour] and the other one will be further into Lake Point,” Miles said. “It will be the same heading south. There will be one sign to warn them, and one that is the confirmation sign that they’re going the right speed.”

In addition to the driver feedback signs, Miles said detection is another project UDOT is working on to increase safety along SR-36. The signals from 2000 North up to Lake Point will be studied.

“We’re checking out our detection on our signals to make sure it’s appropriate,” he said. “Detection detects when a vehicle is actually at a signal, so the light knows when to switch from red to green and from green to yellow. There’s a certain amount of time the yellow light can extend to help get vehicles through before they have to stop abruptly.”

Miles said most detection problems are determined through routine maintenance on the system and monitoring calls as they come in. He said working to make sure people have enough time to get through the light is important because it could be a life saver.

Miles said UDOT will also complete a signal study to look for ways to improve left turn signals to increase safety. Median barriers will also be constructed in the Erda area to help prevent motorists from crossing over to the other side of the road.

“SR-36 is a long straight section of road. We want to beef up the median a bit and prevent crashes whenever possible,” he said. “This project is currently under early design. Next, we’ll get the signal study started to make sure we understand how the lights are working and how much traffic is using each of them.”

Also in Erda, a project on Droubay Road should be completed by the end of May, according to Scott Jones, UDOT safety programs engineer. That project is located where railroad tracks intersect Droubay Road just north of Bates Canyon Road.

“Droubay Road turns to dirt right before the railroad crossing and then the crossing goes quite high in elevation,” Jones said. “People have been driving that road too fast for its conditions and are losing control as they’re coming over the crest of the hill. We identified a number of crashes that occurred at that location, so we approached the county to see if we could improve safety there.”

Safety measures include flattening the slope, smoothing out the curve, and putting in fill material to make the incline more gradual, Jones said.

“We’re also putting up some guard rail along the sides so that people don’t fall off the side because of the crest in the hill as you go up and over,” he said.

The project began in fall 2012, and most of the alignment is complete. Final work includes grading the slope and doing surface treatment so that the road is smooth.

Another safety project UDOT is working on, as part of its Safe Routes to School campaign, is building a sidewalk for safety and to encourage students to walk and bike to school.

“We’re linking a section of sidewalk on 200 South between 900 West and Coleman Street,” Jones said. “Work will begin this month and be done by the end of May.”

Miles said two microsurfacing projects will take place in Tooele County this summer and will be completed by fall. Microsurfacing includes a mixture of oil, sand and polymers that create a thin overlay. Miles said this type of asphalt product seals up cracks, keeps moisture off the subgrade and rejuvenates the riding surface.

“We put [the overlay] down because it’s quicker than a traditional asphalt paving job,” he said. “It’s kind of like a paint job on a wooden house. It keeps the road updated and prevents us from having to do major maintenance in the future.”

The first microsurfacing project will take place along I-80 from the Lake Point exit to the Grantsville exit.

“This project will basically run the length of Tooele Valley on I-80,” Miles said. “It will update the riding surface and keep it in good shape. It’s a preventative maintenance treatment that shouldn’t affect the public much at all, mostly because traffic is pretty light after Lake Point.”

Miles said there will most likely be some single-lane closures throughout the project, but they won’t be long term.

The second microsurfacing project will take place on SR-138, between Sheep Lane and SR-36.

“Because a lot of people use that roadway, it will impact more people,” Miles said. “We’re going to set it up to do most of the work on weekends and there will be a detour on Erda Way.”

Miles said in addition, because the road is used to access events at Miller Motorsports Park, work will not be done on July 4 and July 24, or during events at the racetrack.

“We’re going to do our best to do the work when we’re not impacting commute hours when people are trying to get around the valley,” he said. “Once we begin, we’ll do it quickly and outside of hours that impact a lot of people. We don’t know exact dates yet, but as those dates firm up, we’ll let people know it’s happening.”

In November, UDOT will begin advertising a project that will take place on Erda Way next year. The project is scheduled to begin in spring of 2014, weather permitting.

“We’re doing a realigning of Erda Way and SR-138,” he said. “We’ll curve Erda Way to tie into SR-138 at a 90-degree angle. It’s a safety improvement so people don’t have to look over their shoulder to approach traffic and don’t have to judge gaps.”

Another project set to be advertised this fall and begin in spring of 2014 is the installation of several sections of cable barrier along I-80 between Wendover and Tooele Valley.

“The project is in design right now,” said Miles. “A cable barrier has three to four strands of steel cable that we stretch in the median [to create a fence] to prevent people from crossing over. It’s not as impactive to hit as a concrete barrier, and when someone does hit it, the impact isn’t as jaunting.”

Miles said the barriers will be installed because of some safety studies UDOT has done on the flats between Wendover and  Tooele Valley. Those studies identified three or four areas of roadway where people frequently go off the road.

Another project UDOT is working on is a collaboration with Union Pacific Railway.

At the railroad tracks just south of Stockton, UDOT and Union Pacific are working to install advanced railroad crossing warning signs, crossing gates and general improvements to the road surface.

“We’re partnering on these improvements to make it safer with trains running down the tracks,” Miles said. “Construction should start spring of 2014.”

He added there are a lot of other project ideas in the works for Tooele County, but none of them have yet to be funded.

“We’re always looking at ways to improve things and we’re working with the county and the Utah Highway Patrol on some ideas,” Miles said.