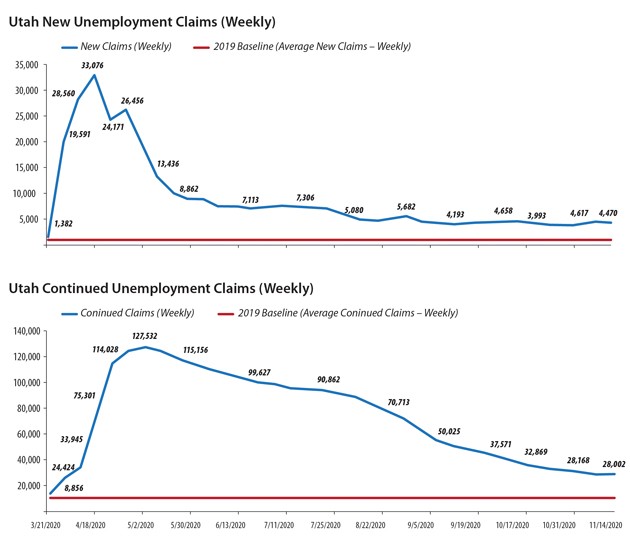 Although declining, claims still ahead of previous years ♦

The number of new claims and continued claims for unemployment benefits in Utah for the week ending Nov. 21 dropped from the previous week, continuing a declining trend since an Aril/May pandemic peak, according to a report released last week by the Department of Workforce Services.

“The need for unemployment insurance continues, as more than 4,000 Utahns are applying for the benefit weekly,” said Kevin Burt, Unemployment Insurance Division director for the Department of Workforce Services. “While new claims are high compared to the historically low 2019 average, they remain significantly lower than the historically high volume seen early in the pandemic, when the average new claims were over 28,000 filed per week.”

For Tooele County the four week average of new unemployment claims was 46 for the week ending Oct. 4, according to the most recent data from the Department of Workforce Services.

For the same time period in 2018 and 2019, the four week moving average of new unemployment claims was 33 and 46, respectively.

Individual’s whose employment has been impacted by COVID-19, should visit jobs.utah.gov/covid19 for updated information, which includes help for employees and employers returning to work, according to the Department of Workforce Services.